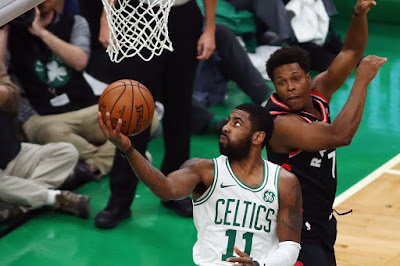 LeBron James took in the Celtics-Raptors game Friday night and had kind words for his former All-Star point guard.

Following a game where Kyrie Irving's 43 points led the Celtics to a 123-116 overtime win at TD Garden, James took to Twitter to congratulate Irving for his incredible performance in what could be a potential Eastern Conference Finals preview. James pointed to Irving's clutch play, something LeBron grew accustomed to back in Cleveland.


It's not shocking to see James show appreciation for one of Irving's most impressive performances of the season. The self-proclaimed King did in fact select Irving in the 2018 NBA All-Star Game draft and has done his best to prove he doesn't have any animosity toward his ex-teammate since the day Irving demanded a trade out of Cleveland.

Now that James is a member of the Lakers, one half of the league's most storied rivalry against the Celtics, it does add an interesting element between the two players who helped lead the Cavaliers to a championship over the Warriors in 2016. Still, James clearly was blown away by Irving's game Friday night and wanted to show love to the point guard who delivered the game-winning shot in Game 7 of the 2016 NBA Finals.