Kyrie Irving plans to retire in his early to mid 30s 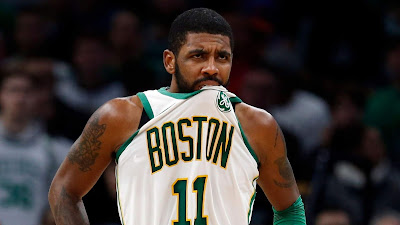 Celtics All-Star Kyrie Irving doesn't plan on having a long NBA career. By his estimation, he's about halfway to retirement.

Irving, 26, talked about his longevity prior to morning shoot around in Atlanta when Hawks forward Vince Carter, who will be turning 42 in January, was mentioned. The league's elder statesman has found a role with the young Hawks, averaging 18 minutes a night.

The conversation transitioned to Irving's career when he was asked if he envisioned himself heading down a similar path as Carter's.

While he does enjoy playing the game itself, Irving says it's everything else that comes with being an NBA star that he's not crazy about.


"I love basketball itself," Irving explained. "But everything that comes with it? It doesn't really matter to me, in terms of my life. I enjoy the game, I enjoy being with my teammates, playing every single day.

"Being an NBA player, this is a dream I've had since I was a kid. I think everything else that comes with it doesn't hold the same stature it once did.

Irving was asked to go into detail about what he doesn't like about the league.


"I just think the material gain in it just doesn't really matter to me anymore as much as it once did," Irving said. "The little things are just what makes the game special. Coming every single day and playing with these guys, and still try to figure out what that challenge is to be better as a basketball player rather than like, 'What's my popularity like?' or 'What branding could be done here?' or something like that. That all comes, but I think the love of the game should always outshine everything else that comes with the NBA lifestyle."

Celtics will look for their first win in four tries Friday night against the Hawks.