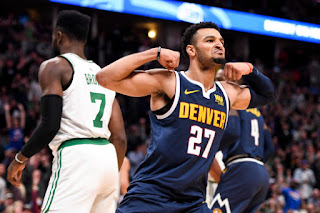 The Nuggets defense is notorious for not being able to stop a nosebleed. Luckily for them, neither could the Celtics Monday night.

After storming out to a 34-19 lead in the first quarter, Nuggets guard Jamal Murray took the game over. He nailed triple after triple as the Celtics were unable to keep dynamic scoring guards in check for long stretches of time.

Even Kyrie Irving, whose 31 points wasn't enough and was the lone pulse of the Celtics' withering offense, could not keep up in the end. Murray finished with 48 points (19-of-30), scoring 23 in just one half and 21 in the fourth quarter.

If it wasn't for him, the Celtics may have ran away with this game. He cooked Jaylen Brown (15 points) with a beauty of an up-and-under on the left baseline and did the game to Al Horford (12 points)-- two of Boston's best defenders -- twice.

Once in the first half and again in the fourth quarter to ice what eventually turned into a 115-107 Nuggets victory.

In the second half when Boston was trailing, whenever they'd mount a comeback it was either Murray, Trey Lyles (13 points) or Juancho Hernangomez (8 points, 5 rebounds) with a shot, contested rebound or defensive stop to stifle the run. It didn't help the Celtics seemed intent on forcing the issue, experiencing lapses like getting called for traveling multiple times and bringing with them more fight than actual talent.

The Celtics' second unit was a disappointment. Marcus Morris and Terry Rozier combined for 5-of-17 for six points apiece. Boston third stop of its five-game road trip will be in Phoenix when they take on the Suns on Thursday.

Nuggets: Finished 20-of-28 from the free-throw line
Celtics: 50 points in the paint, finished shooting at a 50.6 percent clip from the floor