Celtics 114, Hawks 96: C's did what they're supposed to do, took care of business in Atlanta 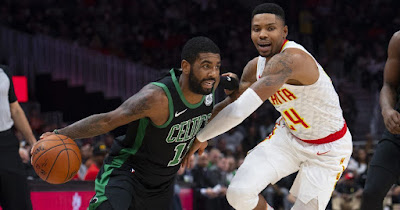 When the Celtics blew out the Sixers on Opening Night at TD Garden, it gave them a false sense of identity.

Beating a team like the Sixers -- one that's projected to be one of the top teams in the Eastern Conference -- meant the Celtics would cruise by the league's bottom-feeders. Boston quickly earned themselves a reality check.

The Celtics quickly found out what it means to be a championship contender. Teams were giving them their best effort and it forced the Celtics to find a new level of effort to stay afloat, instead of having to crawl out of a deep deficit and make comebacks.

After teams like the Magic, Hornets and Knicks each handed the Celtics losses, Boston finally put together a lopsided win and did it against the second worst team in the east. Boston tacked on 45 first-quarter points in Atlanta on Friday, setting the tone early and ultimately topped the Hawks, 114-96.

It was a classic defense led to offense kind of win from Brad Stevens' group. They held Atlanta to 23 first-quarter points and didn't let up throughout the night.

Boston coerced the Hawks to commit 20 turnovers. The Celtics led by 29 points -- their biggest lead of the game -- in the first half and never gave up a lead.

This was the kind of win that the Celtics needed for themselves, snapping a three-game skid and it's the kind of victory that a championship contending team earns time and time again throughout the course of an 82-game season. Since their 18-point win over the Sixers, Friday's win now marks the Celtics' third blowout victory, in which they've beaten a team by 18 points or more.

The Celtics will continue their three-game road trip in Dallas on Saturday when they take on rookie standout Luka Doncic and the Mavericks.