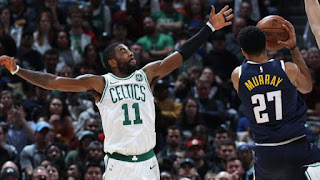 Kyrie Irving isn't upset about the $25,000 fine that was handed to him for throwing a basketball into the stands at the end of Monday night's 115-107 loss against the Nuggets.

Irving understands he deserved it, he knows what he did was wrong.


"There's a sense of professionalism that you have to uphold within this league and I failed to do so, so I take full responsibility of it," Irving said. "In the event that anyone gets hurt, I'm taking full responsibility for it so you just don't have situations like that." [Masslive.com]

Irving, who was very vocal about his displeasure with Nuggets guard Jamal Murray, doubled down on his comments in regards to Murray taking an ill advised shot. He attempted to go for 50-plus points when he took an uncontested 3-pointer just before the game clock expired while the Celtics anticipated Murray would continue to dribble the clock out.


"You just don't play basketball like that," Irving explained. "It's as simple as that. You just don't. There's a tradition and a respect within the game, you have it [the game] sealed, you've had a great game -- game of your life, and you do something like that? It's petty, it's immature."

Murray, who told reporters after the game that he mean to disrespect towards the Celtics by taking the shot, said the emotion of the moment took over when he knew he was on the verge of putting the finishing touches on his career-high. Still, Irving wasn't having it and continued to berate Murray.


"That's just so thirst of a player to go after something like that," Irving said. "Clearly, 50 points is a big deal but get it within regulation. Take it as a man. Get your free-throws and get to 50 points but don't wait until the end of the game when everybody's not playing to just launch up a shot and then go nonchalantly like this," Irving shrugged, "as if it doesn't even matter.

"You just don't do that in the NBA, in any game. It's just a respect for your opponent, and I felt disrespected after the game. So your career-high ball goes in the stands."