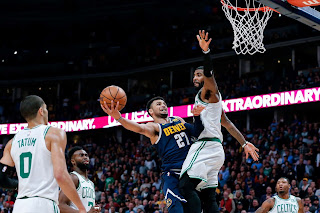 When the opportunity to top off a 50-point performance presented itself in the winding seconds of Monday night's 115-107 win over the Celtics, Nuggets guard Jamal Murray seized the moment.

Instead of dribbling the ball out, Murray fed into the crowd urging him to take on more shot and before the game clock expired he let it fly and the ball bounced off the rim and eventually into the hands of Celtics guard Kyrie Irving. The unwritten basketball rule of holding off when the shot clock is off and you have a significant lead was broken and it didn't sit well with Irving, who chucked the ball into the stands in retaliation to Murray's bush league move.


"The ball deserves to go in the crowd after a bull**** move like that," Irving said back in the Celtics locker room. "So I threw it in the crowd."

Irving further elaborated on why the shot irked him before giving props to the third-year guard.


"I mean, what kind of competitor wouldn't it bother?" Irving asked. "I understand if we fouled him, going to the free-throw line. I don't want to make a big deal out of it. Obviously, I was pissed at the game but it's time to decompress and move on. Congratulations to him having 48 points. He did it in a great fashion against us. Our defense has to be better especially against a player like that in the pick-and-roll. He was the primary concern tonight and he made us pay in certain instances of making some tough shots and some tough layups."

Irving wasn't the only Celtics players displeased with Murray. Marcus Morris said if he was on the floor at the end of the game that he would have also had some sort of response for Murray's last second shot.

Murray understood the Celtics' frustration and said his drive to reach 50 points took over in the tail end of Monday's game.


"No disrespect to the Boston organization, the Boston fans for that last shot," Murray said. "I just had it in my mind I was going for 50. I think everybody understood that's what I was trying to do. I really didn't mean no disrespect. I know half the team over there, so no hard feelings. It was just a fun game, and my emotions took over. I was looking for that ball each time down the court. I think coach called a play for Joker and I pulled up for three. It was just my emotion taking over and that's how I get sometimes when I get going."

He ultimately settled for a career-high 48 points as the Nuggets improved to 9-1.


Kyrie threw the ball into the crowd after Jamal Murray's attempt to make 50-points as the game ended pic.twitter.com/Vbx3oNxmaf
— Celtics on NBC Sports Boston (@NBCSCeltics) November 6, 2018