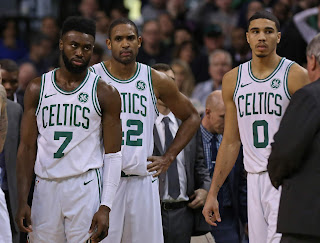 The Celtics will be without two of their key players Friday night when they take on the Cavaliers at TD Garden.

Jaylen Brown, who's been nursing an injured tailbone that he suffered last Saturday night in Dallas, will miss his second consecutive game while big man Al Horford will have a night to rest on the first set of a back-to-back. Coming off an impressive performance Monday night in New Orleans, Horford posted 20 points on 8-of-15 from the floor.

He will take the night off before the Celtics travel to Minnesota to take on the Timberwolves Saturday night. With both guys out Friday, Brad Stevens will most likely turn to the Marcuses to start again.

Marcus Smart and Marcus Morris were both inserted into Stevens' starting lineup together for the first time Monday night in the Celtics' 124-107 win over the Pelicans. The pairing turned into arguably Boston's most complete win of the season.

The Celtics put on an impressive performance on both ends of the floor, including a season-high 124 points on offense and forced 22 turnovers on the defensive side. Boston will search for its third win in seven tries.