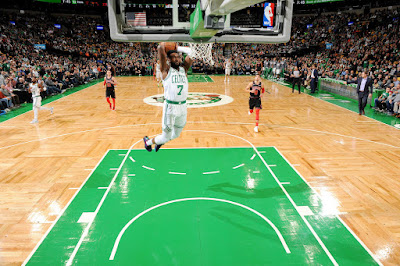 Gordon Hayward started miserably for more than two quarters before delivering some of his best basketball of the season with the second unit. Meanwhile, guard Jaylen Brown looked confident and assertive after admitting to pressing during a bad start.

The struggles continued for Hayward and lasted well into the second half. But then they gave way to a glimmer of hope. He started 0-for-7 from the floor, is averaging 7.1 points while shooting 31.5 percent from the floor over his last six games.

However, when Stevens inserted him into the second unit lineup alongside Marcus Smart, Terry Rozier, Semi Ojeleye and Aron Baynes with under three minutes left int he third quarter, things started to click before the Celtics eventually topped the Bulls, 111-82.

Opportunities opened up as Hayward found his stroke from deep, converted plays in transition, earned a trip to the line and ultimately finished with 11 points on 4-of-5 attempts. It came natural for Hayward as the Celtics' bench outplayed the majority of Chicago's starters.


"I just think you just have to become more -- I think that he would probably tell you that he wasn't happy with it, just because he had a few looks that didn't go down," Stevens said. "But he makes a lot of the right passes. I thought when he was matched up with [Jabari] Parker today he was very good. And I thought, you know, you can play through him or he can space for you. And so, we just need him to be kind of the jack-of-all-trades that he is and find his -- his playing rhythm and transition back into playing at a high level through that. And that's not easy, but that's what we need."

As Boston gears up to take on the Eastern Conference-leading Raptors Friday at TD Garden, Stevens should give some serious thought to bringing Hayward off the bench with the rest of his reserves. While Hayward was able to convert all of his field goals in a six-minute stretch that carried into the final frame, Brown put the finishing touches on an impressive offensive performance.

Brown was aggressive from the opening tip, capitalized on touches in transition, and drained a pair of treys en route to 18 points on 8-of-14 shooting.


"I think the biggest thing is, for our whole team, Jaylen can get to the rim at any time," Stevens said. "And I think the biggest thing is just continuing to not only finish with strength but also just continuing to make the right reads. And I think he's improved in that. And our whole team can get a lot better at that. I thought not Jaylen, but we had multiple other guys that missed quite a bit at the rim, and we need to be able to convert those as we move forward here. But it is good that at least we're getting there a little bit more. That's positive."

If Stevens decides to bring Hayward off the bench while he works his way back to form, no other starter will benefit more from the switch than Brown.

It would create space for him at the wing, earn him more touches in isolation plays that allow Brown to attack the rim and finish strong or get trips to the free-throw line. Hayward proved he can mesh with the second unit, and it would be worth a shot as Boston will look to avenge last month's loss against Toronto.

Stevens may have already had this in mind when he decided to insert Hayward into a lineup full of reserves during the third quarter, just to see how well his starting forward would respond, and it worked. It's time for him to do the same things against the Raptors Friday night and see what happens for Hayward when he spends most of the game with the second unit instead of just six minutes.