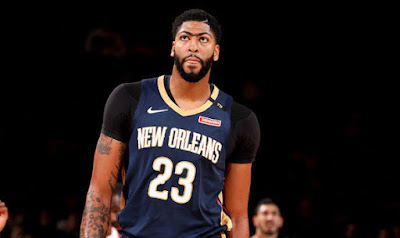 Pelicans All-Star big man Anthony Davis is reportedly open to a trade to the Celtics.

According to Chris Sheridan of Getmoresports.com, Davis has named Boston as one of four teams aside from New Orleans that he's will to play for if the Pelicans find themselves as a "middle-of-the-pack or worse in the competitive Western Conference." The other teams named include the Lakers, Sixers and Knicks.

New Orleans will wait until this season's trade deadline to make a decision, according to an inside source, depending on how well the Pelicans are doing in their conference. Equipped with four future first-round picks and rising talented players like Jayson Tatum, Jaylen Brown and Terry Rozier, Boston has a clear-cut advantage over the other suitors.

Davis is under contract for two more seasons, Celtics president of basketball operations Danny Ainge will surely keep a close eye on the situation in New Orleans. The Pelicans (10-8) are currently ninth in the Western Conference, Davis is averaging 26.6 points, 12.7 rebounds and 2.9 blocks a night.