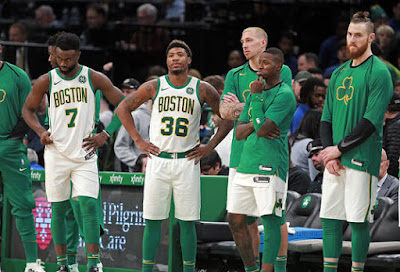 It isn't hyperbole to anticipate things will get worse from here on out. This is a test of how well Brad Stevens can balance out egos after years of coaching overachieving lunch-pale guys.

Stevens is also unable to manage the rotations, frequently playing the rehabbing Gordon Hayward too many minutes to start. Hayward starting with Kyrie Irving, Jaylen Brown, Jayson Tatum and Al Horford is quite possibly the worst lineup in the NBA right now.

Watching Hayward dribble into the paint, kick out to his teammate for a three that ultimately misses is a common pattern engraved in my brain. His awareness, timing and athleticism is all off kilter. A player like Brown plays better without Hayward standing in his way.

When Hayward is unable to knock down shots, it seals off the paint, meaning when Brown goes inside he's bouncing off bodies and struggles to get his layups. Brown has gotten better at finishing around the basket since entering the league.

Last year, in the restricted-area, Brown hit 57 percent of his 329 attempts. This season, he's fallen to 54 percent but when you take Hayward out, his percentage shoots back up to his average from last year.

Hayward also plays better without Brown. His net rating is an impressive plus-10.6 and shooting a decent 60.3 true-shooting percentage.

With Tatum finding his groove this season, the Celtics are doing themselves a disservice by continuing to trout out Hayward in lineups he clearly doesn't belong in. Maybe last year, when Hayward was projected to be a top-dog, this wouldn't have been a problem.

But Brown and Tatum have made names for themselves in Hayward's absence last season. To ask them to return to minimal roles just isn't possible at this point.

There needs to be a cap on Hayward's minutes, at least for games like Friday night's loss against the Knicks, when we can clearly point to the team's downfall as his doing. If the Celtics were to trade Terry Rozier and put second-unit floor general duties on to Hayward, it would be an upgrade for the team.

And maybe that's Hayward's destiny for this season .We're fools for thinking he'd be close to what he was before his season-ending injury. It was just over two-months Hayward began to play 5-on-5 basketball for the first time.

It's safe to say, the Celtics were just as blind-sided as their fans were. The best way for the Celtics to save their season right now is to make room for Brown and marginalize Hayward to a role that requires him to play around 15-20 minutes a night.