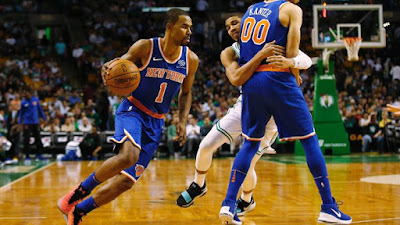 For the first time in two years, Brad Stevens is coaching a .500 team.

The Celtics head coach has never led a roster with such high expectations throughout his NBA tenure, thus, no one could have predicted his team to fall this low 18 games in.

But how his team responds from its worst loss of the regular season will come down to Stevens, the ball is in his court and how his team retaliates is up to him.

Stevens has never been in this position before since taking on the job as the Celtics head coach. Loaded with a talented roster, the Celtics will have to head back to the drawing board and figure out what's led to his team becoming one of the worst statistically offensive teams in the NBA and why opposing guards continue to have signature career nights against his team.

You can add Knicks reserve Trey Burke (29 points) to the list, alongside Jamal Murray (48 points), Devin Booker (38 points) and Kemba Walker (43 points), as just a few guards that lit up Boston's back court defense throughout the month of November. Stevens chalked it up as great scoring guards finding their offensive rhythm at the right time but it's a bit deeper than that.

The Celtics' intensity on the defensive end is sorely lacking and players need to be held accountable. If Stevens doesn't want to take that approach, it's something that needs to be addressed internally. For now, Stevens is labeling the loss as his team just simply playing poorly and stating "maybe we're not that good."

The Celtics reached the lowest point of the season, losing to the lowly Knicks, 117-109 at TD Garden Wednesday night. It was a game the Celtics had no business of winning and didn't come close to recovering from their 26-point deficit.

They managed to slice it to a two-possession game but never gave you the impression that a full comeback was in the cards. To the Knicks' credit, their efficient shooting made it nearly impossible for the Celtics to rally, however, Boston did come close by the margin of four points with 40 seconds left before New York closed the door on the Celtics.

However, Stevens is on to the Hawks. He has to focus on the near future, he has to lead his team in a manner that will snap them out of the rout that's led to the Celtics losing 7 of their last 10 game and are now 5 and a half games behind the Raptors -- a team Boston defeated one week ago -- for first place in the Eastern Conference.

But for a head coach like Stevens, who led Butler to the NCAA championship, he's been in this position before. It's nothing new for him overcoming a one-month skid but on this stage it's a new challenge for Celtics head coach to conquer.


"Tomorrow's Thanksgiving, right? We all have a lot to be thankful for," Stevens said. "We lost a basketball game, we got out played, we've lost a few in a row now, it's been a tough stretch. I think that we'll work and we'll do our very best and that's always been good enough for me. That's OK, you're not going to have great days every day in this. Part of this job description like I said earlier is weathering the storms.

"This is a job, we'll work to correct everything we can, we're also very thankful for all that we have even on nights like tonight."

Sounds from an optimistic coach with the most pressure he's ever felt in the NBA. Time for Stevens to show what he's made of.