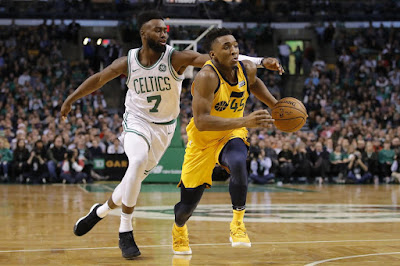 For the first 16 games of the regular season, the Celtics have relied heavily on Kyrie Irving.

It seemed easy for Jazz coach Quinn Snyder to order the double-team and strangle the life out of the Celtics' offense en route to a 98-96 victory, completing a two-game season sweep.

It was the same old habits we've gotten used to. Donovan Mitchell's 28 points led five Jazz players in double figures, Ricky Rubio once again had a field day against the Celtics, dropping 20 points off of 13 shots and got the best of Irving, who picked up his fifth foul in the middle of the third quarter.

Stevens ultimately decided to not risk letting his best player foul out and sat him with 5:12 left, and  that's when things got worst. By the time Irving checked back in, Utah had extended its lead to 15 in the opening minutes of the fourth quarter.

The Jazz' trio of Jae Crowder, Joe Ingles and Royce O'Neal did more than just contain Jayson Tatum and Jaylen Brown, they outright beat them up, Brown especially. He finished the night 1-of-9 from the field.

Thus, leading to Stevens' decision to play Irving with the likes of third-stringers while the Jazz still had their A-Team on the floor. Daniel Theis, Semi Ojeleye, Guerschon Yabusele and Brad Wanamaker saw the floor when the game shifted from blowout territory to a 13-point game with under eight minutes left to play.

Still, Stevens stood pat behind his decision to keep his starters on the bench -- a definitive sign of how frustrated Stevens was with his starters' lackluster performance. He felt they didn't deserve anymore time on the floor.

Irving fought for every bucket and went into his bag to tricks, utilizing everything he possibly could as the Celtics' offense struggled to comical lengths. Only Tatum joined Irving in scoring in double-digit as he finished with 10 points, and Al Horford and Guerschon Yabusele each finished with nine.

Saturday's loss concludes a three-game Celtics homestand, they will head to Charlotte on Monday to take on the Hornets.

Celtics: Shot a lowly 38.5 from the field off of 91 shots and finished with 17 turnovers
Jazz: Shot 44.9 percent from the floor on 78 attempts