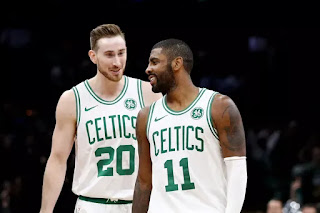 The 2018-19 season has been a trying time for Celtics guard Gordon Hayward.

Recovering from his gruesome season-ending injury hasn't been easy for the veteran as he's continued to make progress in returning to form.

However, 21 games into the regular season, Celtics All-Star Kyrie Irving isn't concerned. He voiced his opinion on what Hayward's biggest problem has been this year when he spoke to reporters Thursday.


"I think that he's passing a little too much for Gordon's potential and his talent," Irving explained. "I think, coming up in the next few games, he'll be able to show some different things that he's been on for the start of the season. Just being more aggressive offensively and looking for his shot more."

Irving has been encouraging Hayward to take more shots. His belief is Hayward's offense will come back naturally, but according to Irving there needs to be an aggressive approach beforehand.


"We had practice yesterday and I told him, 'Look for your shot more. Get aggressive and get yourself going because you are a great talent in this league and I don't want you to ever forget that,' he said. "Of course, he does a great job of coming off the pick-and-roll and making those passes, but I want him to be aggressive and score the basketball for us as well because we are going to need it down the stretch."

Hayward is averaging 8.9 field goal attempts a night, which ties a career-low since his second season in the league when he averaged 11.8 points a game. He's currently averaging 10.1 points in 26.7 minutes a night.