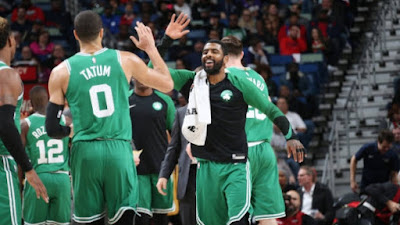 Brad Stevens may have just discovered his most efficient starting lineup.

Finding the right balance of offense and defense out of the starting unit has been a struggle for the Celtics this season. Stevens has had to tweak his starting five a lot throughout the first 21 games for a number of different reasons but Monday's lineup against the Pelicans showed plenty of upside.

The addition of Marcus Morris and Marcus Smart (for Jaylen Brown) gave the Celtics energy on both ends of the floor from the opening tip and helped keep the Pelicans at bay. Smart's defense in the back court forced 8 turnovers by Jrue Holiday, while the Pelicans couldn't come up with an answer to slow down Morris, who netted 19 points to go with his 11 rebounds.

Stevens, who told reporters after the Celtics' 124-107 win that he'll spend the entire regular season searching for the right starting lineup, isn't going to set a specific lineup every night but it's easy to say Morris, Smart, Kyrie Irving, Jayson Tatum and Al Horford has been the most productive one yet. While taking all season long to find the right starting lineup may or may have not been said in jest, there's a lot to be said about what Monday's lineup exemplified.

Smart's defensive prowess set the tone, it applied pressure to the Pelicans' ball handlers and forced turnovers, thus, sparking Boston's open looks from deep and fast-break opportunities. The Celtics finished with 18 fast-break points and drained 19-of-39 from behind the arc.

Opposing guards have been crushing the Celtics this year, adding Smart addresses those concerns and adding Morris to the front court sparks the offense. Morris is not only one of the team's most efficient scorer, his offense is also contagious alongside the starters.

Horford's aggressiveness offensively came naturally Monday night. Horford found plenty of open looks from inside and outside of the arc -- where he made 8-of-15 from the floor, including 3-of-4 from deep and scored 20 points.

Tatum found his stroke in the second half, he picks his spots when to attack and when to drain open looks from deep on his way to 20 points. Aside from Smart's 8 points, the entire starting unit scored at least 19 points or more as Irving finished with a team-high 26.

The pick-and-rolls sets ran between Irving, Horford and Morris freed up a lot of great looks and led to great ball movement throughout the team. The Celtics' 124 total points is a season-high, they scored 32 points off 22 Pelicans turnovers.

The Celtics (11-10) avoided going below .500 as they will have the next three days off before hosting the Cavaliers at TD Garden on Friday.

Brad Stevens' starting unit scored a season-high 93 points on Monday night against the Pelicans. Jaylen Brown missed his first game with a sore lower back, no word on if he'll miss any additional time.