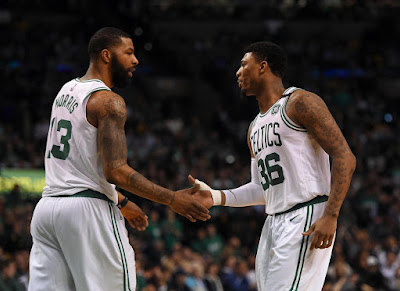 At 11-10, the Celtics' start is below the expectations many had prior to the 2018-19 season due to Boston's talented roster. For years one of Brad Stevens' flaws has been sticking with a consistent rotation throughout the regular season.

While it didn't seem like his greatest flaw in the early years of his tenure in Boston, those issues have been exacerbated this year. He's reinserted Aron Baynes into the starting lineup and while the Aussie seemingly hasn't lost a step from last season, he hasn't acted as the same elixir to Boston's defensive woes.

Boston's issues are not on the interior, Al Horford is still spry and averaging a career-high 1.7 blocks per game. Though 32-year-old, Horford is the same All-NBA Defensive caliber talent he's always been, there's been a lot of scoring allowed by opposing guards.

The backcourt's defense has taken a serious step back. Kyrie Irving no longer feels the need to prove himself to his critics, his effort shooting the gaps and remaining engaged in one-on-one defense waxes and wanes.

Jaylen Brown is a forward that's been guarding speedy shooting guards his entire career. Frequently playing out of position, there simply isn't enough minutes for Brown at either wing position and Terry Rozier has shown more effort and actual defensive talent.

Stevens didn't help matters by apparently not knowing how to initiate a sufficient double-team or trap to put the lid on dynamic playmaking guards whom have swung winnable games to the opponent during late stretches. To begin the year, Stevens trusted Gordon Hayward to return to form one year removed from a fractured tibia and Hayward has been anything but his old self.

He's heavier, and subsequently a step slower. Shifting away from Baynes, Stevens also had Hayward swallow the bitter pill that he is no longer a capable starter.

This made room for Marcus Morris and Jaylen Brown, who've benefited from Hayward's minimized role. Still, the Celtics were not winning very much and struggled mightily from the same issues.

On Monday, prior to Boston's game against the Pelicans, Brown was announced out with a tailbone injury. Looking at his bench, Stevens tapped Marcus Smart to fill out the hole at the shooing guard spot next to Irving and the results were dramatically different.

Jrue Holiday and E-Twaun Moore collectively shot 49.4 percent from the field and combined for 18 points on 6-of-15 attempts. The typical pick-and-roll offense that carved up Boston in the first 20 games didn't work for New Orleans.

Smart clocked in nearly 40 minutes, adding a much needed jolt to the Celtics' defense and offense -- which has been lacking energy. The best lineups the Celtics have seldom used are the ones featuring Smart and Morris.

Morris has had a stellar start to the season, averaging 14 points, shooting a career-high 43.2 percent from the floor and a career-best 6.7 rebounds. And Smart has improved his playmaking abilities and decision-making on offense.

When both are on the floor together with the rest of the starters, the Celtics' shooting skyrockets, as does their offensive rating. Boston reaches its ceiling, multiple lengthy-armed shooters that are able to inspire effort from teammates.

Smart averages nearly two deflections a game and contests the most shots of any players featured in the backcourt. He's the only one playing with passion and purpose, it seems like and hopefully Stevens keeps him in the starting lineup.

Two of the most consistent players on this team has been Smart and Morris, the ones who know what they're good at and perform at a high level when it matters most.