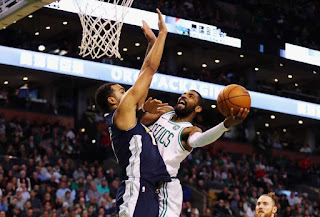 The Celtics are making a conscious effort to tweak their offensive approach.

Now they have to see if they can keep it up for an entire game.

On Monday in Denver, they were everything head coach Brad Stevens could've wanted. They were moving the ball, finding open shots and not living and dying by the 3-pointer.

Then in the second half, they reverted to their inconsistent ways and the Nuggets took advantage, led by guard Jamal Murray, who poured in a career-high 48 points in Denver's 115-107 victory. The Celtics set the proper tone early and it paid dividends. They shot at a 63 percent clip in the opening frame and eventually pulled ahead by 18 points.

The Celtics didn't settle for the same outside looks we've grown accustomed to seeing lately but the second half told a different story. Denver's offense woke up and grabbed its first lead before the break.

For a game between two of the best defensive teams in the league, the Celtics struggled in trying to slow down the Nuggets, especially their standout guard who had himself a career night. Jamal Murray dropped a career-high 48 points, including 19 in the fourth quarter where the Nuggets eventually cruised to a 115-107 win.

When the pressure was on, the Celtics reverted back to chucking up outside shots and not attacking the paint -- where they scored a season-high 50 points on the night. However, that was only two points greater than what Murray scored all night.

It's difficult to put together a win when the opponent is putting together one of the best performances of the NBA season, still, the Celtics stopped doing what they did in the beginning and it cost them the game. Despite the aggressive attack, Boston only attempted 12 free-throws --  a growing issue of the early season.

Meanwhile, the Nuggets finished 20-of-28 from the line and overcame 31 points from Kyrie Irving as the Celtics dropped to 0-2 on the five-game road trip. They'll look to bounce back in Phoenix when they take on the Suns on Thursday.