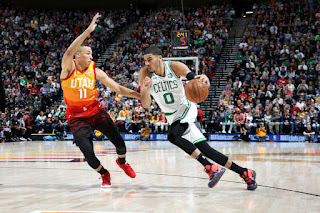 Anointing Jayson Tatum as the Celtics' secondary closer was premature.

After the second-year forward followed up a 23-point game on opening night against the Sixers with an impressive fourth quarter performance that put the Knicks away for good a few days later, Tatum was all of a sudden considered Kyrie Irving's sidekick. He was another solidified closer the Celtics could turn to down the stretch when they needed someone to close out an opponent.

But after a shaky start to the month of November, Tatum hasn't looked himself and has shied away from the big moments at the end of fourth quarters. With Irving away from the team due to a memorial service for his grandfather on Friday, the Celtics were forced to take on the Jazz without their All-Star point guard -- a golden opportunity for Tatum to revert to the kind of scorer we saw back in October.

The Celtics trailed Utah for most of the first three quarters but kept the game close down the stretch. Tatum attempted two field goals throughout the first ten minutes of the final frame and barely touched the ball in the last two minutes, when he missed a contested layup and tacked on the Celtics' final points of the game after the contest was already decided as the Jazz topped the Celtics, 123-115.

It was shocking to not see Tatum command the ball when his team needed him most. We haven't seen the same aggression that we saw early on this season from him and it's tough to pinpoint exactly why that's the case.

Brad Stevens believes Tatum is simply overthinking on the offensive end, which could be the reason behind why we didn't see him make plays or demand the ball. One thing that's for sure: Tatum still has a ways to go before we can call him Robin to Irving's Batman.

He's had a rough month of November, thus far, averaging 11.3 points a night while shooting 36.6 percent from the field in five games. As for a clutch-driven Celtics player who is second to Irving at the moment, that title belongs to Marcus Morris.

Stevens couldn't be more happy with his Sixth Man, who's turned into one of the team's most consistent scorers and already has two of the biggest shots of the season so far with one that came less than 24 hours before Friday's game in Utah and the other came last month against the Thunder in Oklahoma City. Morris is currently the team's second-leading scorer, averaging 15 points a night to go with his 7 rebounds while shooting a team-best 51.3 percent from the floor.

Terry Rozier, who replaced Irving in the starting five, led with a team-high 22 points. Tatum finished with 21 points, Morris led the bench with 16 points and Gordon Hayward scored 13 to go with his 7 assists in front of his former team for the first time since signing with the Celtics in 2017.

The Celtics may not have a clear-cut No. 2 option behind Irving, but if we had to give the title to someone it would surprisingly go to the back up forward in Morris -- something no one could have predicted back in early October. Tatum, of course, still has plenty of time to groom into the player we pictured him as at the beginning of the season but if it's one thing we learned Friday night against the Jazz, it's that this team is very different without Irving, especially when its towards the end of the fourth quarter and they're staring down a two-possession deficit.

When it comes to who's the Celtics' bonafide closer -- it's Irving and no one else comes close to giving Boston a shot at an improbable comeback. At this point, Tatum still has plenty more to prove before he can be mentioned in the same sentence.

Jazz: Utah shot 55.8 percent from the floor
Celtics: Boston drained 17 3-pointers -- which used to be a franchise record a couple of seasons ago before it was shattered back at TD Garden last week against the Bucks