Who gets a slice of the Celtics 'Blame Pie'? 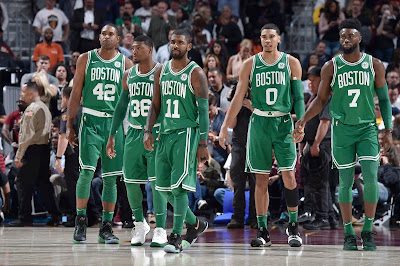 In the spirit of the holiday season, I wanted take the time to dish out some 'Blame Pie' for the Celtics ice cold start to the 2018-19 season.

The Celtics have a shocking 10-10 record (their latest loss being against the Mavericks) after the first 20 games and are widely considered one of the biggest shocks to the young NBA Season. Boston was picked by many to be a no nonsense favorite in the Eastern Conference and some even believed the team could be a dark horse to win the Finals (this dumb-dumb included).

Fast forward nearly a quarter of the way into the regular season and the Celtics are a middling .500 squad with a lack of direction or understanding as to what they need to do in order to capture their first Eastern Conference crown since 2010.

While some Celtics fans are using the Aaron Rodgers famed "RELAX" line, others have taken to the ESPN Trade Machine to help out Celtics GM Danny Ainge find the solution via a blockbuster deal.

Either way, a 10-10 start requires a little bit of blame to be assumed. Here is who I see as the most eligible recipients of this tasty pie:

NO QUESTIONS ASKED. Stevens' profile has been elevated to one of the top coaches in the NBA and is often referred to as the new age Gregg Popovich. If this is the case, Stevens has no excuses. He now has the most talented team he has ever coached at any level but is struggling to get the players to see the vision as he does. With big personalities budding in his locker room and playing time becoming a major commodity, Brad must get his men on the same page and fast. I have complete faith the baby-faced brainchild will come through but he certainly should be the one the blame falls to if the issues persist.

Kyrie has played as well as anyone on the Celtics and may actually be one of the few who is playing up to expectations but his role in the slow start is deeper than the box score. Irving arrived on Boston's doorstep via a blockbuster late last summer after demanding a departure from the shadow of his ex-foil LeBron James. Kyrie was vocal about "wanting his own team" and to step into the limelight as a bonafide leader and 'the man' leading a franchise to NBA royalties. That being said, time to pay up Uncle Drew. Irving takes the second piece of the pie by not being able to lead this team. If Kyrie Irving is to be the Celtics franchise player, his role needs to include being the un-questioned leader in the locker room as well as in the boxscore.

Big Al has also had a respectable start to his 2018-19 season statistically speaking but his lack of leadership in the time of need is concerning at best. Horford begins his third season in Boston as one of the most tenured players on the roster both by NBA experience and his time in green. Horford has never been a vocal leader in his time in Boston but sometimes the team's needs require you to go outside of your comfort zone. Horford gets his slice because he IS a leader on this Celtics team and one of the most respected players in the league.

I know what you're thinking but hear me out. Smart has been the Celtics' emotional leader for the last three years and I have had every Celtics Twitter troll around to tell me about it. Through 20 games this season, I haven't seen that guy. I saw a player who is more interested in justifying his big new $11-plus million a year deal. HOWEVER, Smart did look much more like the player Boston shelled out over $30 million to on Friday night in Atlanta when he was all over the floor and showing what playing with energy can do for this Celtics squad.

What feels like the Celtics under the radar scapegoat for their poor start finally clocks in with the fifth slice of the pie. Rozier has had a below average start to the new season and many would would agree that it can be directly attributed to his eye on a saucy new contract waiting for him in the summer of 2019. The problem with giving Scary Terry too large a slice in my opinion is simple and I can't really blame him.

Rozier is now facing the NBA equivalent of a player paradox. If he quietly accepts his role and 'does his job,' he risks losing out on a big second contract or at least attracting suitors to create a bidding war against the Celtics in the summer (see Marcus Smart's playbook from 17-18 and how badly it failed). If he bucks against the current set up, he looks like a selfish player who is only concerned about himself.

Needless to say, Rozier is in a tough spot and his involvement in this Celtics team may be temporary. How temporary? It could depend on the next month and how he decides to play it.

We've all heard the quote "with great power comes great responsibility," right? Apparently, this is a lesson that Kobe Bryant didn't quite get to when Jayson was spending last summer under his guidance in the ways of 'The Mamba.' Tatum's ascension to league starlet in last year's NBA playoffs created a vacuum in the Celtics lineup that hasn't quite been figured out by Brad Stevens or the Celtics. Tatum became a star overnight and now the Celtics don't know how to tend to the new monster they created. In this, the biggest onus may be on Tatum himself to realize that even though he is a budding superstar, his best move in the immediate present might be to step back and let the 'old guys' figure themselves out first.

A poor start to his third season has landed him a spot on every Celtic diehard's list as the "man to deal" if an appealing offer were to fall into Danny Ainge's hands. Brown has been enemy No. 1 with his poor shooting and lack of growth in his game from a year ago and in the end, the hate is justified. HOWEVER, Jaylen is still a 22 year old with his best years in the NBA firmly ahead of him. Brown absolutely needs to improve and does deserve his slice of the pie, but to place more than a marginal slice on him is over doing it.

"But, even though he's coming off a career threatening injury Zach!?" Yes, BUT, his inclusion on this list is almost of no fault of his own. Hayward has been below average on his return to the basketball action but he has done everything asked of Brad Stevens and the Celtics. This includes a minutes restriction during the first month of the season and a seat on the bench to allow for Stevens to return to a successful lineup Boston used most of last season.

Hayward's slice of the pie is simply because he was an All-Star being introduced to a team that found it's identity in last year's playoffs. Now, with Hayward healthy and ready to assume his duty, Boston doesn't know how to pencil in it's highest paid player. That said, this piece could also be under Brad Stevens' name in that he needs to find a way to use his former college star without upsetting the balance of his young and talented nucleus.

With so much blame to go around, the Celtics simply need to figure it out. But for now it's time for them to enjoy this pie, eat up fellas and keep it moving.