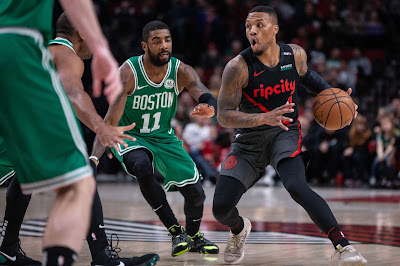 For the first time this season, Kyrie Irving and Jayson Tatum each delivered exceptional offensive performances for the Celtics.

Both players had a few impressive games, respectively, under their belts heading into Sunday night's contest against the Trailblazers but have been unable to put it together on the same night. When Tatum scored 23 points against the Sixers in the season opener, Irving went 2-of-14 and when Irving dropped a season-high 39 points against the Nuggets, Tatum finished the night with four points.

Before Sunday, Irving and Tatum never came close to both scoring 20-plus points in the same night and when they both caught fire in the second half the Celtics seemed destined to put together another comeback win. After Tatum scored 12 straight points in the third quarter, Irving rattled off 15 of his own but it still wasn't enough for Boston to erase its 21-point deficit.

Much like what we saw in Phoenix, where Irving lit the Suns up and put the team on his back, it turned into a Celtics win. Or when Tatum topped off the Knicks at Madison Square Garden when his team needed him to, the Celtics erased a deficit and the second-year forward guided his team to a victory.

In both games, the Celtics got off to a rough first half. The slow start, which is starting to become a pattern for the Celtics, only made things worst.

Sunday marked the third consecutive game in which Boston trailed its opponent by double figures at the half and it was the first night of the five-game road trip where the Celtics never held a single lead. Despite Irving (21 points) and Tatum (27 points) combining for more than half of the Celtics' total points, Portland still came out on top in a 100-94 win.


Last 3 first-half deficits the #Celtics have faced at the end of their five-game road trip:


Crawling out of a double-digit hole on the back of Irving may have worked against a team like the Suns, but it wasn't going to fly in Portland. The Celtics have to find a way to keep the game relatively close before it's too late to make a difference and it starts on the defensive end, where Brad Stevens has always been able to get the best from his players on that end of the floor.

After leading the league in defensive efficiency throughout the month of October, the Celtics are now ranked 27th in defensive rating (111.7). A tremendous drop from the beginning of the season, and if they want to turn things around it's going to take more than simply relying on the production of Irving and Tatum.

Damian Lillard's 19 points led the Blazers alongside Jusuf Nurkic's double-double (18 points, 17 rebounds). CJ McCoullum poured in 14 points and Al-Farouq Aminu added 11 points, including a dagger 3-pointer with under a minute left to play.

Portland (10-3) managed to survive the big second half by Irving and Tatum through its defensive stops and well-balanced attack, not surprising for a team that currently holds the NBA's fourth-best record. The Celtics finish their five-game road trip with a 1-4 record, and will look to avoid a potential .500 record against the Bulls on Wednesday at TD Garden.