Philly lands Jimmy Butler, what it means for the Celtics 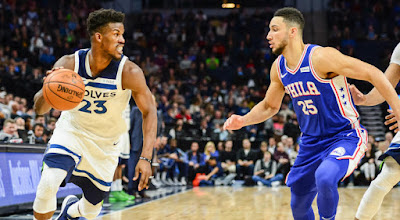 The Sixers just got significantly better and put the Eastern Conference on notice Saturday by landing four-time All-Star Jimmy Butler.

The Athletic's Shams Charania broke the story surrounding Butler, who was traded from the Timberwolves along with Justin Patton to the Sixers in exchange for Dario Saric, Robert Covington, Jerryd Bayless and a 2022 second-round pick. The deal has been finalized by both sides and will have a trade call with the NBA on Monday, according to Charania.

Minnesota had been trying to move the All-Star wing since before the start of the regular season. Sources told ESPN's Adrian Wojnarowski that Minnesota's head coach Tom Thibodeau felt compelled to deal Butler after a win-less five-game road trip, when he realized the dysfunctional environment was never going to improve with Butler still on the team.

This is a tremendous addition for Philadelphia. The Sixers (8-5) are currently in third place in the Eastern Conference but may have felt they needed more firepower to compete with the Raptors, Bucks and Celtics -- three teams of the top five teams in the east that have each handed them one of their five early losses.

Adding Butler also gives the Sixers a valuable weapon at the end of games. With a history of coming up big in clutch moments, Butler is a legitimate threat to beating opponents single-handedly and completes its 'Big 3' alongside All-Stars Ben Simmons and Joel Embiid.

The Celtics will certainly have their hands full the next time they face the Sixers. Butler is also one of the best two-way players in the league, a strong force on the defensive end.

Philly hopes to ink Butler to a long-term deal within the foreseeable future. However, negotiations cannot commence until Butler opts out of the final year of his currently deal.