Celtics need Kyrie Irving to lead, not another veteran 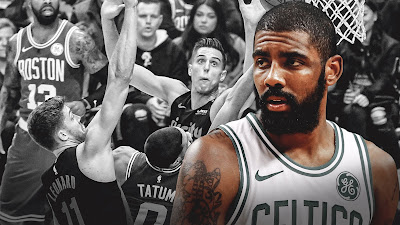 The Celtics are struggling to find momentum in the early season and the losses are piling up through the first 13 games.

Boston nearly returned from its five-game road trip win-less. With a lone victory in Phoenix, the Celtics are forced to look themselves in the mirror and reflect on what it is that's preventing them from stringing together wins.

Kyrie Irving, who opened up to the media following Sunday night's loss against the Trailblazers, says they've been simply outmatched by their opponents, even though it's the Celtics that outweighs teams in most matchups, Irving says, his team has to be more disciplined than most.


"We come out and clearly we outmatch teams at dang near every position," Irving said. "We have a lot of good players. And when I say outmatch, I mean in terms of the groups we have out there, we pretty much have a mismatch every time out there down the floor. So it comes with discipline. It comes with understanding. It comes with experience of just being on a team like this. We can't have empty possessions, so whoever is shooting the shot, if they feel like it's a great shot, then we all have to feel comfortable with it."

For a relatively young team, the Celtics rely on the leadership of Irving and veteran big man Al Horford -- two players who've carved out important role on opposite ends of the floor. There isn't another Celtics player who has played in more playoff games than Horford, who has over 100 postseason games under his belt, and no other teammate has been to the grandest NBA stage more times than Irving.

Still, Irving says the Celtics could use another vet.


"Looking at this locker room, me being in my eighth year and being a 'veteran' as well as Al and Baynes, right now I think it would be nice if we had someone that was a 15-year vet, a 14-year vet that could kind of help us race along the regular season and understand it's a long marathon rather than just a full-on sprint," Irving explained. "When you want to play, when you want to do what you want to do, it's all about attitude and effort. That's all it is."

With a championship pedigree and as someone who has helped lead a team to three consecutive trips to the NBA Finals, Irving is not only capable of taking on a veteran role but should understand exactly what it takes to guide this Celtics team through its beginning stages of a deep playoff run. Why is Irving talking about bringing in a new set of eyes to help him?

There must be something else lying underneath Irving's comment. There's more to decipher, maybe  Irving's advice and leadership in the locker room is falling on deaf ears.

While the head scratching began after Irving's "veteran" suggestion, he offered some clarity when he subliminally called his team out shortly afterwards.


"We needed this," Irving said. "We're not as good as we think we are. I said it at the beginning of the season. The excitement is done. It's real basketball now, so it's not just about the potential of the team or where we'll be at the end of the season. It's right now and taking care of what presently is in front of is. We have challenges. We have barrier to get over as a team and individually. I'm going to be the most patient out of everyone. I'm not going to get too frazzled, too high or too low or stuff like that. It's a long season. I just understand that for us to be special we just have to get through some challenges."

Now it all makes sense. Irving wants to see more out of his teammates, most of whom believe by Irving's estimation, that this season's run is going to somehow be easier than last year's due to the fact that the team's core is full healthy, when in fact the high expectations makes things the opposite -- the challenges pile on.

There are more hurdles in the way this time around and it's going to take a new level of individual focus from each player before the team can figure things out as a team. Irving put his name as a leader in air quotes because he's not used to being that guy, but his explanation as to why the Celtics needed to go 1-4 on their five-game road trip speaks volumes -- he's clearly not impressed and his teammates aren't putting forth the kind of effort by his standards.

But he has to be that guy. Irving has to hold his teammates to a higher standard, express frustration if the losses continue and be someone who expects more from everyone in a Celtics uniform.

Irving's been hesitant in calling out his teammates but it's coming soon, if the Celtics don't turn things around. His subtle jab will challenge his team and hopefully turn into wins.

The excitement and anticipation is done, the season is here, the Celtics are barely a top-five team in the Eastern Conference and struggle is real. Still, Irving is at the center of the fray, is confident that his team can overcome these early obstacles and is patiently working towards the ultimately goal.


Click the link below to listen to our segment of the Causeway Street Podcast on Kyrie Irving's leadership role and if Brad Stevens needs to do more for his team: