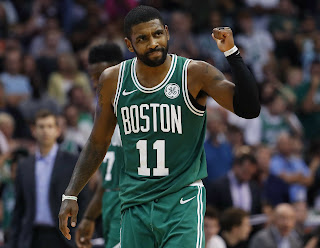 Watching the Celtics knock off the Suns Thursday night in Phoenix felt like old times.

Back when come-from-behind victories was the norm but never got old. Whether it was those feisty Celtics teams that were led by Isaiah Thomas or last year's underdog group that would erase double-digit deficits while Kyrie Irving and Gordon Hayward looked on from the bench, in the end Brad Stevens always seemed to put his team in position to win no matter how big of a deficit they faced.

Thursday night's game had that same feel to it. Boston crawled back from a 22-point second-half deficit, forced overtime and then cruised to a 116-109 win. It was the kind of win that the Celtics needed at this point of the season.

For a team struggling to find its identity, Brad Stevens forced his guys to dig deep, stay focused and keep fighting. Easier said than done, considering how the first half -- where all starters not named Kyrie Irving (3-of-10) went scoreless on 0-of-15 attempts -- played its self out.

For the first time this season, the Celtics were the underdog again. Sure, they were facing the Suns, a team destined to finish in the upper echelon of next year's draft lottery but after Boston dug itself into a 15-point hole heading into the final frame, it was a daunting task for an offense that was completely out of sync.

However, that didn't stop Irving from taking matters into his own hands on both ends of the floor. His defensive stops disrupted the Suns, while his shooting made all the difference for him and the rest of the Celtics.

Irving led the way with 39 points, including 18 in the fourth quarter and overtime. He was clearly the most important Celtics player of the night but it was Boston's head coach that set the stage for Irving and his guys.

Jaylen Brown added all of his 17 points after halftime, Marcus Morris also added 17 points off the bench, including a game-tying 3-pointer at the end of regulation off of a pick-and-pop play with Irving that sent the game into overtime.

Devin Booker caught fire, he went off for a team-high 38 points on 15-of-30 from the floor and T.J. Warren contributed 29 points and 7 rebounds. The first overall pick DeAndre Ayton notched a double-double (14 points, 10 rebounds).

Staring down the second half of a back-to-back set that ends in Utah Friday night, most coaches would have waved the white flag facing a 14-point hole with only 3:45 left in the final frame. Instead, Stevens saw an opportunity for the Celtics to prosper in the face of adversity.

It's the kind of win that should pull his guys together to finish the road trip on a strong note. Celtics will take on the Jazz Friday before closing out their five-game west coast swing in Portland on Sunday.

Celtics: Irving took a season-high 28 attempts for the Celtics and made 13 of them. He also drained 6-of-13 from deep while Boston as a team doubled-up their season average of free-throw attempts by getting to the line 31 times.