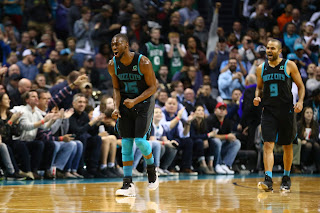 The Celtics continue to lean on Kyrie Irving at the end of games. But it's a formula that isn't always going to translate into wins, as was evident in Boston's 117-112 loss to the Hornets Monday night.

Sure, it was Irving's 23 points int he fourth quarter and extra period that made all the difference in Friday night's win over the Raptors. As did his 18 points at the end of a comeback win over the Suns pushed Boston to its only win of a five-game road trip. However, for a team that shot 50.6 percent, including six players that scored in double figures against the Hornets Monday night, it was evident the Celtics had options down the stretch.

Following Kemba Walker's 3-pointer that pushed the Hornets' lead to five with four minutes left to play, Irving took five of the Celtics' following six attempts before Walker drained a dagger trey that sealed Boston's fate. Coming off of his sizzling 60-point performance on Saturday in a losing effort, Walker picked up where he left off by draining 43 on the Celtics.

Still, the Celtics had plenty of opportunities to top Charlotte. Jayson Tatum found his offensive rhythm in the fourth quarter on his way to 18 points, but only touched the ball once throughout the final four minutes.

Instead, Brad Stevens turned to Gordon Hayward out of a timeout while his team trailed by four points. Hayward, who came off the bench for the Celtics, finished with a measly four points yet still found himself in at the end of the game and clocked in 31 minutes.

It was an interesting decision by the Celtics' head coach. Hayward didn't show any signs of turning things around, offensively, yet still found himself with the ball in his hands throughout the most crucial moments of the game.

Still, Stevens was content with his team's performance. When he was asked by NBC Sports Boston's Abby Chin if there was any frustration with the Celtics' level of inconsistency, he strongly disagreed with the notion and responded by praising Walker and the Hornets.


"This wasn't an inconsistent night, this was a special performance that beat us," Stevens replied. "Sometimes you have to take your hat off to them. That's a good team, that's a well-coached team. They played really hard and he [Walker] is on a great run.

"I try to look at things objectively. Saturday night was disappointing in a number of ways. Tonight, we saw more of what we want to be."

Celtics are now 4-6 on the road, and will head home to take on the Knicks Wednesday night at TD Garden.

Hornets: Kemba Walker has scored 103 points in his last two games, now leads the NBA in scoring
Celtics: Losers of six out of their last nine games