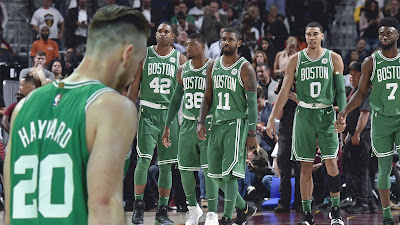 It's time for Brad Stevens to start making changes.

After a mediocre start to the season, the Celtics (7-6) haven't been able to find consistency and are suddenly on the verge of becoming a .500 team.

Boston has struggled out of the gates throughout most of its first 13 games of the season, which has forced the Celtics to try to piece together wins by crawling out of double-digit deficits time and time again.

Sometimes it's worked, but six out of 13 times it hasn't. Stevens needs to adjust his starting lineup -- one that will prevent his team from falling so far behind in the first halves of games while also strengthening its bench.

Throughout the Celtics' road trip, Boston trailed by at least 16 or more points at halftime in three out of five games. Coincidentally, their biggest deficit -- by 20 against the Suns -- of the west coast swing was the only game of the trip that turned into a win, they finished 1-4.

It's time to shake things up and it starts on the defensive end of the floor. Adding Marcus Smart to the back court is the right place to start.

Opposing guards have been a thorn in the Celtics' side of late. Scorers like Jamal Murray (48 points), Devin Booker (38 points) and Victor Oladipo (24 points) have had their way against Kyrie Irving and Jaylen Brown, bringing Smart into the fold will turn things around and sending Gordon Hayward to the bench while switching Brown to the small forward position will open up opportunities on both ends of the floor.

Hayward will thrive off of facing opposing team's secondary defenders, it will give the reserves an edge, offensively. Terry Rozier's offense has been very streaky this season and Smart's scoring has been almost non-existent, he's averaging 5.4 points a night.

You can almost say the same thing about Hayward's production. He averaged 8 points throughout the five-game road trip and shot 34.1 percent from the floor in 26.8 minutes per game.

Marcus Morris has been the only consistent scoring punch off the bench. The simple defense for offense switch between Hayward and Smart will alleviate the Celtics from giving up so many points and will open up scoring opportunities for both Hayward and Rozier.

The two scorers are very effective when they're on the floor together. Hayward's play-making abilities allow him to find Rozier via backdoor cuts and in transition while Hayward's outside touch makes him a threat against opposing defenses that are forced to cover him, thus opening the floor for a slashing Rozier, who can create off the dribble.

They would feed off each other nicely. Hayward could also play off the ball and develop in pick-and-roll sets with Aron Baynes while Smart secures opposing back courts and wouldn't have to worry as much about wanting to score.

Smart, who expressed his frustration with his team's defense or lack thereof, says he isn't seeing the kind of effort on the defensive end that Stevens commands from his guys and told reporters after their loss against the Jazz that the Celtics are simply letting opponents feel comfortable. Meanwhile, Stevens is putting the blame on himself, he made that clear following Sunday night's loss in Portland when he was asked how the Trailblazers managed to lead the Celtics for all 48 minutes.

Stevens even went as far as to say that he's not guiding his team towards the right direction.


"You find your flow by making the next right play and playing hard, that's it," Stevens explained. "When you're in the game, you have a job to do on that possession; you do it. Then if you do it really well over and over again, you have a good team. We're not there yet and so that, to me, is well-coached teams get there. We're not a well-coached team right now, that's pretty obvious."

The best place for Stevens to start is by tweaking his starting lineup; insert Smart and bench Hayward before things get worse. The Celtics are already five games behind the first place Raptors -- who they will face Friday night at TD Garden -- and are currently tied for fifth place in the Eastern Conference.

It's time for Stevens to hold his players accountable. He's already accepted the blame for the Celtics' slow start, it's now time for him to take action.