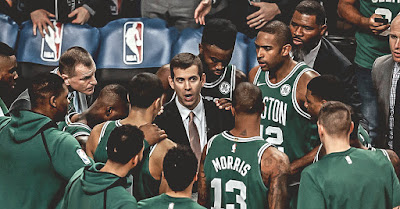 Celtics head coach Brad Stevens has never been a short-term kind of guy, most of the decisions he makes this early in the regular season has the big picture in mind that will have a long-term effects on his team.

Through 16 games, the Celtics' head coach has been patient with his group's progress. On the road he gave them the green light to make a 20-point comeback against the Suns when most coaches would have pulled their starters that deep into the fourth quarter, and last Friday in Utah he made excuses for his team's shortcomings -- pointing to the fact that Boston was in the midst of the most difficult schedule in the league, a team that was exhausted from a grueling five-game road trip.

But following Saturday's 98-86 loss by the hands of the Jazz, Stevens didn't make up any excuses for his team's lack of effort and poor execution.


"They're [the Jazz] on the same stretch we are as far as number of games," Stevens explained. "They had a back-to-back, they traveled last night so absolutely no excuses other than we just got outplayed. They're a better team than we are; they beat us twice. They deserve that."

Stevens' frustration with his team triggered a surprising move in the second half. When the bulk of his starters weren't playing up to par throughout the third quarter, it carried over into the final frame before Stevens decided he had seen enough.

With his team trailing by 18 points and nine minutes left to play, Stevens pulled every one of his guys not named Kyrie Irving in exchange for his third unit. In came Guerschon Yabusele, Brad Wanamaker, Daniel Theis and Semi Ojeleye to counter Utah's run.


"We needed energy," Stevens explained. "We weren't going anywhere with what we were doing, so it was better just to mix it up and see if those guys could bring us some live legs and 'let's go.' We had a moment there where we cut it to 13 or whatever and I think they won that eight-minute stretch.

"We needed other guys out there or at least that's how I felt, maybe I'm wrong."

Stevens wasn't the only alone. His All-Star point guard agreed with the decision to go deep into the bench.


"Those guys deserved to play at that moment," Irving said. "We just didn't have it. With the primary group of guys that we play, we just didn't have it. I've seen other coaches in the league do it; of just making a statement and putting in the guys that are going to play hard and be in the right spots and they showcased that. We ended up winning the quarter or the last minutes that we played, 20-15, so they deserved it."

A visibly frustrated Stevens shook Jazz' head coach Quin Snyder's hand seconds before the final buzzer and walked off the floor before any of his players. He was agitated with his group and questioned his team's effort when he was asked if there was a confidence issue brewing.


"I think there's a lot of things that it could be but at the end of the day, you know, you build confidence through doing things over and over and over because that's your focus," Stevens explained. "That's your intent. Your job is your focus. You know what you're supposed to do. You perform every assignment, you do it physically, you do it tough and then all of a sudden the ball goes in.

"It's just kind of funny how it works. The game honors it."

Celtics will look to bounce back Monday night when they travel to Charlotte to take on the Hornets.