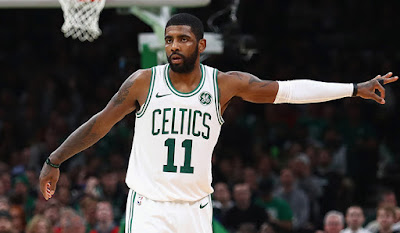 The Celtics are finally starting to look like a team that is destined to top the Eastern Conference.

Led by Kyrie Irving, who is quickly becoming the best fourth-quarter player in the league, the Celtics are finding their identity and it's coming at a perfect time. With a relatively light schedule ahead of them, the Celtics didn't miss the opportunity to make a statement against the conference-leading Raptors Friday night at TD Garden.

Toronto couldn't find an answer for Boston's All-Star point guard, he dazzled by defenders en route to 23 points in the fourth quarter and overtime period but he didn't do it alone as the Celtics topped the Raptors, 123-116. Once again, he put his team on his back Friday night at TD Garden -- where he had the best game of the season, scoring 43 points to go with his 11 assists and big defensive stops and did it against the best team in the Eastern Conference. But what was different about Irving's performance Friday compared to his other stellar games this season, was the support he received down the stretch.

Tatum scored 12 of his 21 points in the fourth quarter and overtime period and it went a long way and so did Gordon Hayward's play making abilities when Toronto tightened up its defense against Irving. It made all the difference and when the Celtics needed to protect their lead, Stevens didn't hesitate in keeping Hayward -- who clocked in nearly 40 minutes for the first time this season -- in the game.


"He's a good player and there's going to be a curve," Stevens said. "I think that 15 on eight shots is pretty good when you consider how much we're asking him to handle the ball and make plays for others. But I think he's done a lot of things in the last couple of weeks where you can see those steps are being made and it's just a matter of feeling good again. 39 minutes is a good step in the right direction, as far as just his confidence -- and go from there.

Irving, who shot 69.2 percent on 18-of-26 attempts, was absurd and the Celtics needed every bit of it to top the Raptors. It was a signature regular season performance that has set a precedent for his team.

It was one of the most well-rounded performances by the Raptors but without the support of guys like Tatum, Hayward and even Marcus Morris, who defended a potential Kawhi Leonard game winner at the end of regulation, Boston wouldn't have had enough. The Celtics still have ways to go but Friday's significant win over the Raptors will resonate throughout the roster when they take on the Jazz Saturday night and especially after the home stand when they'll face lowly teams like the Knicks, Hawks, Mavs and Cavaliers.

Celtics: 50 points in the paint, shot 52.8 percent from the floor