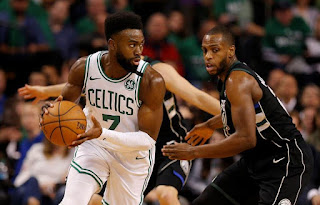 Celtics guard Jaylen Brown was ruled out of Thursday's game against the Bucks and is considered day-to-day.

Brown mentioned feeling soreness during team shootaround and pointed to plantar as a possibility. Coach Stevens could neither confirm or deny when he spoke to reporters before Thursday's game.


"He's out, that's all I know," Stevens said. "Said he felt a little bit better, but they decided to hold him out. Sounds like it will be day-to-day."

Stevens didn't reveal who would be taking Brown's place in the starting lineup but it turned out to be Semi Ojeleye who got the nod against the Bucks. Stevens didn't have much else to say when he was asked about Brown's status moving forward.


"I don't know how to answer that," Stevens replied. "If he was available to play, he'd play. Our medical team always makes those decisions. If he's sore at all, it's a prudent decision."

Celtics will embark on a five-game road trip that starts in Indiana on Saturday night.