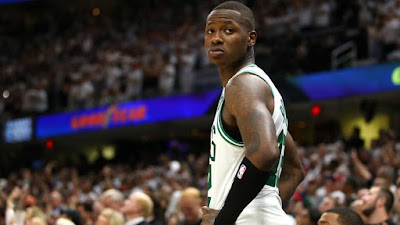 The Celtics are only 17 games into the regular season and we may have just seen our first disgruntled player remark come from backup point guard Terry Rozier.

Rozier, who's gotten off to a rocky start following a stellar season, is in a diminished role this season and posted a cryptic tweet following Monday's 117-112 loss against the Hornets suggesting to be traded. He tweeted out, "Let's do us ALL a favor."

A message that as isn't crystal clear as past trade requests made players via the popular social media site, however, still created a buzz throughout the morning. It doesn't come a surprise, considering Rozier's name has been tied to a few teams that have been monitoring his situation with the Celtics from afar, in case Danny Ainge ultimately decides it's time to move on from the impending free agent.

While he is averaging 23.1 minutes per game this season, he's also behind Kyrie Irving and Marcus Smart, thus, hasn't seen much playing time throughout fourth quarters -- where he was most effective throughout last season. After receiving plenty of backlash and speculation, Rozier clarified his remarks with the following tweet, stating his previous message had nothing to do with requesting a trade.

Rozier was of course asked about it during media availability Tuesday afternoon at the Celtics' practice facility and laughed it off before confirming his initial tweet had nothing to do with him.


Terry Rozier laughs about the reaction to his tweet: “There wasn’t nothing on that.”
— Jay King (@ByJayKing) November 20, 2018