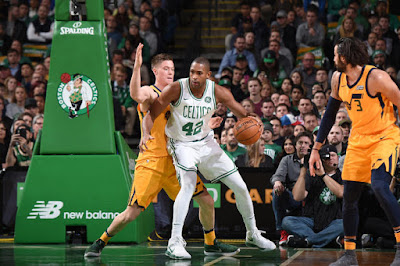 As the Celtics' elder statesman, Al Horford is typically the one who shows little to no concern when things aren't going well for his team.

There's usually a sliver lining that he likes to share with reporters following each and every loss throughout the regular season, however, following Saturday's 98-86 loss to the Jazz, Horford was in rare form. He was honest and shared his concerns surrounding the team's struggling offense.

Are there repairs that need to be made?


"Yes, yes," Horford reiterated. "It's very clear. There's no way around it, it's very clear that we're concerned about shots and our offense."

Still, that wasn't a good enough reason for Brad Stevens to pull his starters four minutes into the final frame. Facing a 13-point hole, Horford was upset with his coach's decision and as he looked on from the bench for most of the fourth quarter.


"It was frustrating because I wanted to be out there and still fight," Horford said. "But coach had a better feel for the game. As a competitor, I wanted to stay in and do what I can but he felt like we really weren't going anywhere and it can't only be one or two guys doing the things we really have to do and be consistent with it. Tonight, we just weren't."

When he was asked about what Stevens said to his team following such a disappointing performance, Horford pleaded the fifth. The details of what his head coach said to the team is going to stay in the locker room but Stevens was obviously pissed off, Horford said.