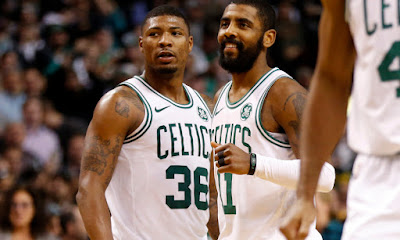 When the Celtics dropped their fourth loss in fives tries last Saturday against the Mavericks, Marcus Smart had a tough time putting into words the troubles that have been plaguing his team.

He didn't have a solution nor an explanation for Boston's shortcomings.


"I don't know," Smart responded when asked how can the Celtics turn things around. "That's the problem. If I knew, we wouldn't be having this discussion, right? Once we figure that out, things will start changing. But until then, we're going to continue to get our ass whooped."

Whether it was his play, snarky remarks or film study -- possibly a combination of all three -- Brad Stevens got the picture prior to Monday night's game against the Pelicans. Don't expect the Celtics head coach to tell you his step-by-step thinking process but if one had to guess as to what transpired between then and a trip to New Orleans, it's safe to assume Smart was most likely going to start whether Jaylen Brown was available or not.

As one of the few bright spots from the Celtics in Saturday night's 113-104 loss against the Mavericks, Smart earned himself his first start of the season. Smart, who continued his streak of solid performances in his native town, finished with 19 points on 5-of-8 from the floor, including 3-of-4 from deep.

He was responsible for 19 of the second unit's 27 points. However, it's Smart's defense that Stevens could use most within his starting unit.

Boston's back court defense has relatively been a turnstile for opposing guards lately. From an All-Star like Kemba Walker (43 points) having a signature performance to youngsters like Jamal Murray (48 points) and Trey Burke (29 points) having career nights, Stevens needed to make a defensive-minded adjustment to add poise to his starting lineup.

It made all the difference for the Celtics and Kyrie Irving, the back court mate who benefited the most from Stevens' fixing.


"I think the unit that we had out there today, we really had that mindset going that we wanted to start out the game and have a defensive presence," Irving explained. "Marcus on the ball took some of that pressure off of me of being off the ball as well, offensively and defensively."

Brown, who's nursing a tail bone injury after a tough fall against the Mavs, will await Stevens' decision moving forward when the Celtics take on the Cavs Friday night. It could be another modification that sees Brown and Smart both start or Stevens could go a more traditional route and stick Smart back into his backup role.


"When he's playing with me we play pretty well together at the 1 and 2 spot," Irving said. "So defensively and offensively I feel like he brings our numbers up. And I'm appreciative of that. My energy can get depleted coming up and down and directing the ball every single time. And having Marcus in there gave me that outlet to be able to get off the ball. So we did pretty well with our unit tonight. We started off the game well and we never looked back."

The defense certainly didn't leave much to be desired if you're Brad Stevens so the easy choice would be to stick with Smart in the back court. Even though revamping his second unit and reassigning roles may be a tough task when dealing with young talented egos, it's not the worst thing in the world for a team that's one-quarter into the regular season, slightly over .500, and with championship aspirations.