Why starting Aron Baynes is a step in the right direction 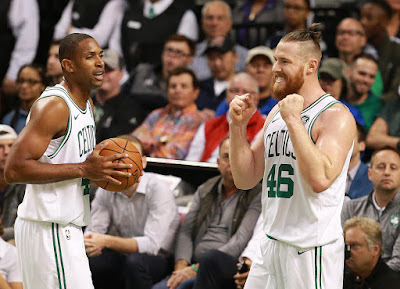 As Celtics Nation cohesively panics in light of Monday night's loss to the Hornets, here's an optimistic outlook. Even in defeat, the Celtics appear to be on the right track towards righting the ship.

For starters, Gordon Hayward came off the bench, which allowed Boston to decipher who's their top two offensive options and to concentrate on getting shots for those players. The starting lineup of Kyrie Irving, Jaylen Brown, Jayson Tatum, Al Horford and Hayward produced an alarming 90.8 offensive rating. Brad Stevens was reluctant to shift away from the original starting lineup but did anyways, starting big man Aron Baynes -- which was a step in the right direction.

A retread of what worked in the past, Baynes at center allows Horford to conserve energy. However, that wasn't the case last night, you can chalk up the failure to Stevens for turning away from Baynes when he drew his third foul early and only played seven minutes.

Boston ended up losing the rebounding battle because of Stevens' hesitancy to use Baynes late. When the Hornets got numerous second-chance opportunities, they made Boston pay dearly for its lack of size, an 11-5 advantage completely negated the fact that Boston dominated with points in the paint and successfully initiated fast-breaks for almost the entire game.

All season long, Boston has given up major scoring outputs from opposing guards such as Victor Oladipo, Ricky Rubio and Monday night it was Kemba Walker's turn -- all of which are mostly known as slashers whom are extremely tricky by the basket. Having a big camp out and deter them from charging to the cup and getting superstar fouls would've helped mightily.

This season, Baynes has been effective in defending shots less than six feet from the basket just as he was last year. His defensive field goal percentage sits at 48.2.

While it's not elite like Hassan Whiteside's numbers, it's still miles better than Boston's alternative options down low. Throughout the regular season, Horford is better suited for defending opposing fours, than fives. The likes of Marvin Williams, Derrick Favors and Thaddeus Young conserve energy for Horford because he doesn't have to worry about his back being jumped all the time.

Let Baynes do the dirty work, risk him fouling out of games by playing him down the stretch and even entertain the idea of closing game with him every now and then when you need the necessary muscle on the defensive end. Things may look bleak at the moment, but Hayward coming off the bench to let Tatum, Brown and other finds their own footing alongside Irving, could be the turning point of the regular season.