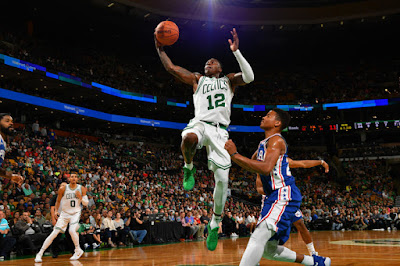 The Celtics are confident that they are equipped with the kind of roster depth that can impact a game whenever an opportunity presents itself.

With a starting lineup of Jaylen Brown, Jayson Tatum, Aron Baynes alongside Marcus Smart and Terry Rozier, the Celtics raced out to a double-digit advantage against a 76ers team led by Ben Simmons, No. 1 overall pick Markelle Fultz and Jahlil Okafor. Philadelphia never led once as the Celtics topped the 76ers, 113-96 in their second-to-last preseason contest.

The duo of Smart and Rozier led the Celtics' efficient offense, while sparking fast-break opportunities as the two took turns dissecting Philly's defense and finishing strong at the rim. Smart, who drained a pair of 3-pointers, continues to get much more lift off his jump shot ever since shedding 20 lbs over the summer and Rozier displayed his explosive offense that led to 15 points off of 5-of-8 field goals and 4-of-7 attempts at the free-throw line. He also pulled down a team-high 10 rebounds.


"I thought it was one of the things that was kind of missing from our first five days or so of practice as we were trying to figure out what we were going to do with that unit," Stevens said about Rozier and Smart's chemistry. "You know, we basically had them separated most of that time and I just think they bring a lot when they're on the court together, and the energy that they play with -- the way that they can lift you on offense and defense."

The Celtics finished the opening frame with a 17-point lead (37-20) that was eventually extended to a 31-point advantage by the second half.

Boston got their first look at Fultz, who finished with 12 points on 5-of-11 shots. It was an underwhelming showdown between the No. 1 pick and No. 3 pick Tatum, the two players who were traded for each other on draft night. They barely shared the floor except for in the final minute of the first half when Tatum blew past Fultz and missed a layup but earned a trip to the free-throw line.

Tatum (7 points) hit an opening 3-pointer at the very start of the game but cooled off from there. He later made a layup and finished 2-for-3 from the charity stripe.

Abdel Nader (15 points) turned in his best performance of the exhibition and Semi Ojeleye scored a game-high 16 points in 28 minutes. Baynes, who only turned in 8 minutes, hyper-extended his left knee in the first half and will be reevaluated tomorrow.

Boston will close out their preseason schedule on Wednesday when they head to Charlotte to take on the Hornets.