Wyc Grousbeck on Isaiah Thomas interview: 'It's an understandable reaction from a true champion' 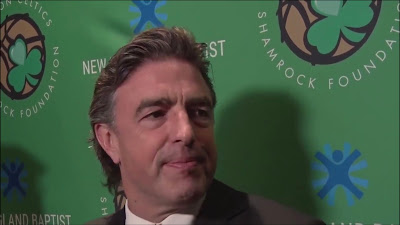 Thursday night was the Shamrock Foundation's annual Tip-Off Gala and while Celtics owner Wyc Grousbeck was on deck answering questions about the upcoming season, the subject of Isaiah Thomas' comments about Danny Ainge were brought up by the Boston media.

In an interview with Sports Illustrated, released on Wednesday morning, Thomas went on to praise the city of Boston and the Celtics organization, but not the president of basketball operations.

"Boston is going to be all love," Thomas said. "I might not ever talk to Danny [Ainge] again. That might not happen. I'll talk to everybody else. But what he did, knowing everything I went through, you don't do that, bro. That's not right. I'm not saying eff you. But every team in this situation come out a year or two later and says, 'We made a mistake.' That's what they'll say, too."

Danny Ainge of course was quick to defend his former All-Star point guard's quotes regarding being dealt to Cleveland.


"You know that's the hard part of the job," Ainge said. "I mean, I know there is a lot of feelings that go on when these type of things happen. I was player that was traded twice so I understand his sentiments, but you guys know how much I love Isaiah. He's a great kid and I wish him the best."

Wyc Grousbeck understood Thomas' comments, but also made no excuses for approving the deal that brought Kyrie Irving to Boston.


"I'd be hurt if I were to be traded," said Grousbeck. "It's an understandable reaction from a true champion, somebody that I will always think of with respect and appreciation and admiration for what he did. So it was very hard to agree to trade him this summer."

Grousbeck on sending Thomas to the Cavaliers: "I have to approve those trades, I approved that one, so I take responsibility for that."

The Celtics owner went on to walk in Ainge's footsteps of taking the high road when it came to having nothing but well-wishes for Thomas.


"I wish him all the very best," said Grousbeck. "I couldn't be prouder to have known him and to have had a great season with him."

Good thing Thomas only has qualms with Ainge and not Grousbeck, who actually gave the 'OK' on the trade. Let's see what else comes to light between now and Tuesday, when the Celtics open up their 2017-18 campaign against the Cavaliers.


To watch the rest of Wyc Grousbeck's presser from the Gala, click the video below: