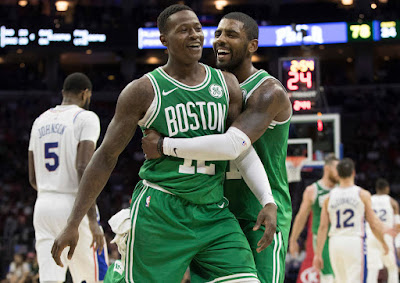 The Celtics are now 2-0 in preseason play after pulling away from the Philadelphia Sixers in the second half, for a 110-102 win at the Wells Fargo Center.

Kyrie Irving led all scorers with 21 points on 7-of-14 shooting, including going 5-7 from behind the arc for the Celtics first road victory.

Terry Rozier added 13 points, while Aron Baynes chipped in 12 points, 6 rebounds and Marcus Smart finished with 11 points off the bench.

Boston led 73-72 halfway through the third quarter before Jason Tatum (9 points, 5 rebounds) capped off a 9-2 Celtics run with a driving dunk.

The Sixers would get within six 105-99 with 2:35 play but Boston held off any comeback after leading by as many as 14 in the final period.

Despite Ben Simmons' 8 points and 5 assists, the former 2016 No. 1 overall pick, turned the ball over five times. The Celtics defense forced 24 Philadelphia turnovers (12 steals overall) that led to 13 points for Boston.

Marcus Morris, who was acquitted on all assault charges earlier this week, did not play on Friday night in his hometown of Philadelphia after re-joining the Celtics.

Boston will return to the TD Garden to play the 76ers in their home preseason finale on Monday night. Tip-off is at 7:30.