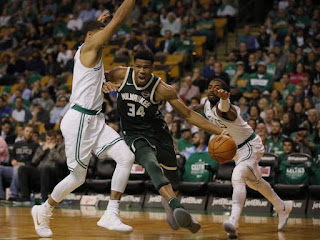 There are only a handful of players in the NBA that can impact the outcome of a game from start to finish and on Tuesday night the Celtics faced off against one of them.

For four quarters, Giannis Antetokounmpo (37 points, 13 rebounds) dominated the Celtics -- challenging their defensive schemes throughout and kept the Bucks afloat, preventing Boston from grabbing a big lead. In the end, it was enough for Milwaukee -- topping the Celtics, 108-100.

Once the Bucks found their offensive rhythm in the first half, the Celtics struggled in getting stops down low. Antetokounmpo spent most of the second quarter dancing along the baseline and his 14-point, 7-rebound first half led the Bucks to an eight-point lead (52-46) with three minutes left before the break.

After an early lead, the Celtics spent the start of the second half playing catch-up and it eventually paid off -- they took a six-point lead with under a minute left in the third quarter when Brown went on a 6-2 run (80-74). Milwaukee retaliated the best way they know how -- give the ball to Antetokounmpo.

By midway through the final frame, The Greek Freak had already poured in 32 points, 10 rebounds and drove the Celtics nuts while Stevens scrambled his lineup in hopes of finding one that could contain the best player on the floor. Fortunately, the game was tied at 89 and the Celtics still had a fighting chance but that was before Milwaukee's crucial run.

Bucks went on an 8-1 run, grabbing a 97-90 lead. However, the Celtics weren't done -- responding with a 7-2 run to pull within two (99-97) before Matthew Dellavedova knocked one in from deep with 44 seconds left to play.

The C's couldn't answer on the other end. Brown committed his sixth and final foul on Khris Middleton, who made a pair from the charity stripe to extend Milwaukee's lead to five and Boston never recovered.

Celtics will seek their first win of the regular season on Friday when they head to Philadelphia to take on the 76ers.

Milwaukee shot 50 percent from the floor and finished 25-of-30 from the free-throw line. Defensively, there were lapses in the Celtics' coverage -- which led to open looks and a lot of fouls.