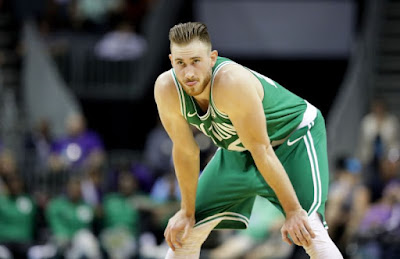 Less than six minutes into his Celtics debut, Gordon Hayward suffered one of the most gruesome injuries you'll ever see in sports.

While attempting to grab a lob pass from Kyrie Irving, Hayward split defenders LeBron James and Jae Crowder and absorbed light contact when he lost his balance midair and bent his ankle as badly as a person possibly can.

Hayward remained on the floor in pain before a stretcher was brought onto the floor. Players from both teams were in shock after play stopped.

Cavaliers players knelled, including Dwyane Wade, while Hayward's teammates huddled together. Some members of the Celtics appeared to be in tears, including Irving, as they waited and watched Hayward get carried off the floor on a stretcher.

After being examined by both Celtics and Cavaliers medical staff, it was confirmed that Hayward fractured his left ankle and will taken to a nearby hospital for further evaluation.

ESPN's Brian Windhorst reported that James and Isaiah Thomas -- who helped recruit Hayward to the Celtics before he was dealt to Cleveland -- made their way over to the Celtics locker room to spend time with Hayward.

Isaiah Thomas, who recruited Hayward to Boston over summer, has also been with him in locker room.
— Brian Windhorst (@WindhorstESPN) October 18, 2017


The Celtics have announced that Hayward has fractured his left ankle, while being examined by doctors from both teams at the Quicken Loans Arena