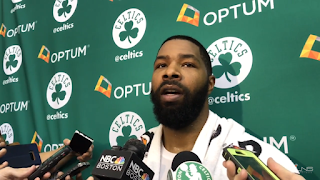 After his first practice as a member of the Boston Celtics, Marcus Morris addressed the media for the first time since his aggravated assault trial.

Morris, along with his twin brother Markieff, were found not guilty on all counts Tuesday -- allowing Morris to join the Celtics before they head to Philadelphia to take on the 76ers. Celtics assistant general manager Mike Zarren introduced Morris to the media after Thursday's practice in Waltham.


"It's a big relief (to be finished with the trial)," Morris said. "For a second I flt like it was kind of killing my character for a lot of people that don't know me. So just to get acquitted of everything and now be a Boston Celtic, that's all I'm looking forward to."

Throughout the trial, Morris kept himself busy when he wasn't in court. Team officials sent a team staffer to Phoenix, keeping Morris in basketball shape through early morning workouts.

If convicted, Morris and his brother were both facing jail time. But Morris was worried about the outcome of not being on a basketball court with his new teammates more than he was about the verdict of the court system that held him for 10 hours a day.

As a six-year veteran, Morris will look to bring his toughness to Boston in a Brad Stevens system he says comes easy for him.


"Competing against these guys over the years, I think they know what I can do," Morris explained. "I know what they can do. I think it'll be really easy for me to fit in. I gotta be the tough guy on the team. I gotta be the protector. Guys, you know, knocking my guys down, I can't have that. You know what I'm saying? It's going to be my role to be the bully. And I accept that."

Morris is set to make his Celtics debut Friday night against the 76ers.