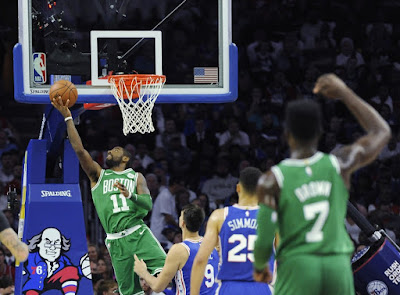 The Celtics and 76ers entered the Wells Fargo Center in Philadelphia thirsty for their first win of the season Friday night and needless to say both teams turned in one of the uglier basketball games you're going to see this year.

For the first time this season, Kyrie Irving (21 points) led his team in scoring while grabbing 6 rebounds to go with his 4 assists, Al Horford turned in yet another strong performance behind 17 points, 9 rebounds and rookie Jayson Tatum (15 points, 8 rebounds) did the same. But that doesn't tell the whole story.

Celtics committed more turnovers in the first half (13) than they made in their two games (CLE: 10, MIL: 12) prior to Friday. They ultimately finished with 19 in what was a sloppy game on both sides.

Joel Embiid struggled to find the bottom of the net for Philly, he finished with 11 points on 4-of-16 attempts, and so did Ben Simmons but took less shots (4-of-11). JJ Redick's 19 points nearly led his team to a win -- he was hot for four quarters -- and Jerryd Bayless added 18 points.

Despite the large amount of turnovers, the Celtics still had a lead heading into the second half before the 76ers found their stride and grabbed a nine-point lead while taking advantage of a five-minute Celtics scoring drought. However, the Celtics recovered by out-scoring Philly by 13 in the final frame and got help from unlikely contributors like rookie Jabari Bird and newly-acquired journeyman Shane Larkin.

Larkin drained most of his field goals via pick-and-roll jumpers and scored eight of his 10 points in the fourth quarter -- pushing the Celtics to rally back from a five-point hole in the final frame.


"You have to always be ready for your name to be called, especially when you have injuries," Larkin said. "You never know whose night it's gonna be.

"When coach (Stevens) called my name, I had to go out there and be aggressive, play my game. And it worked in our favor."

With help from Larkin, the Celtics put themselves in position to take home their first win in three tries. They pulled ahead 88-84 with five minutes left before Irving closed things out, scoring seven of his 21 points.

The Celtics will have the weekend to head home and rest up before taking on the Knicks at TD Garden Tuesday night.

The Celtics cleaned up the glass in Philly, out-rebounding the Sixers, 55-47. Embiid (14) Simmons (11) and Dario Saric (10) combined for 35 boards but it was more of a collective effort for the Celtics. Horford led the team with 9 while Tatum, Aron Baynes and Jaylen Brown each pulled down 8 rebounds, and Rozier led the bench with 7 rebounds to go with his 14 points.