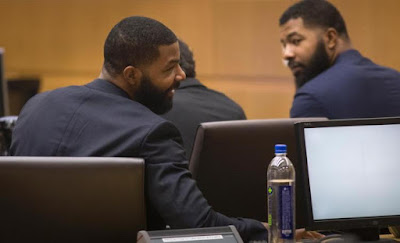 Former USC football Gerald Bowman, who was arrested in connection to the night in question back in 2015, was also found not guilty.


On his immediate plans, Marcus said, "I'm going to Boston, gonna get back with the team"
— Robert Gundran (@RobertGundran) October 3, 2017


Two associates of Morris, Julius Kane and Christopher Melendez, pled guilty to assault charges the week before the trial began, that lead to the Morris twins and Bowman being tried as accomplices to the assault of 36-year-old Philadelphia native Erik Hood.

On Jan. 24, 2015, according to a Phoenix police report Hood was punched in the face outside the ARCH facility during a high school basketball tournament where the Morris twins (both then playing for the Phoenix Suns) were in attendance. Hood ran to a dimly lit area before being beaten by a group of three men, (presumably Kane and Melendez), plus one who was never identified.

Markieff Morris was then seen nearby, where his Rolls Royce was parked based on several witnesses. However, the details beyond the punch outside the ARCH were spotty throughout direct testimony and cross examination by witnesses called from both the state and the defense.

A local barber also testified that Bowman was getting his hair cut at the time of the assault and was not present that night. It was never determined if the Morris twins were there during the attack, thus the defense team had a strong enough case to warrant a not guilty verdict.

A witness did testify that a video operator (who saw the assault from afar) ran into Markieff Morris while heading towards the scene outside from the ARCH gymnasium, was offered money from an associate of Hood to testify that the Morris twins were involved in the beating.

The evidence of witness tampering was brought to the state's attention before the start of the trial to corroborate the defense's belief that the victim was looking for a pay day by suing the Morris brothers, based on several text messages Hood sent.