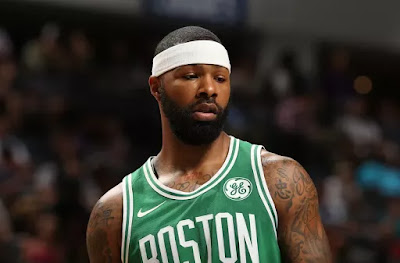 After arriving late to training camp last month, Celtics forward Marcus Morris is now expected to miss the first 10 days of the regular season due to soreness in his right knee.

According to Brad Stevens, Morris was dealing with the injury before the start of camp and will be re-evaluated within the next two weeks.


"He will most likely be out here for the coming week-plus and then we will re-evaluate after that," Stevens said after Sunday's practice in Waltham. "They've done all the testing, and structurally, the knee is in good shape. But I think it is a quick turnaround to get here last week and play in a regular season game. It's going to be a little bit of time probably before he hits the court again."

Morris, who missed nearly two weeks of training camp due to an aggravated assault trial, admitted that he felt like he needs more time to condition himself before the start of the regular season. A couple of weeks of conditioning and practicing with his teammates will certainly help move things forward, if the soreness in his right knee is in fact a result of his late start in training camp.


"With him getting here a little bit late, we feel like he needs a little more of a preseason," Stevens said.

Celtics will continue to take the proper precautions to insure Morris is completely healed before hitting the floor. Morris is expected to be a defensive anchor for the Celtics this season, specifically against Cavaliers forward LeBron James, who averaged 20.5 points per 100 possessions when defended by Morris throughout the 2015-16 season -- the lowest average against any defender in the league that season.


"He was able to go through everything. He's actually structurally improved, he's gotten stronger, feels better, but we just kind of felt like after watching him practice yesterday and then talking to him, that he still looks like he's not quite full go, and so it's better to be on the safe side," Stevens explained. "It's a long year, he's a really important part of our team, and so if he's at 80 percent or 85 percent now, let's get him to 100 instead of risking that getting lower or something you're dealing with all year."

With Morris out for Tuesday's season opener in Cleveland against the Cavaliers, rookie Jayson Tatum will most likely start in the front court alongside Al Horford and Gordon Hayward.