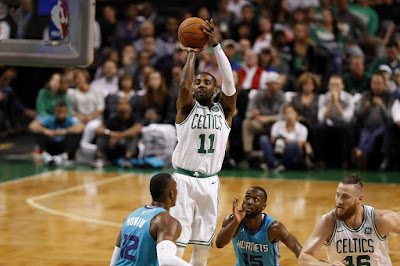 Throughout his tenure in Boston, Brad Stevens has rarely ever discouraged his players from taking the 3-point shot.

Last season, the Celtics tied the previous franchise record for most 3-pointers made in a game (17) twice before eventually breaking it on January 6 when they drained 19 from deep against the 76ers. Therefore it came as no surprise that in four preseason games, Boston averaged 30.5 attempts from downtown.

They drained 40 of them, including 16 in their final tuneup last Wednesday against the Hornets, and finished their four-game schedule at a 40.2 percent clip. After finishing 14th in three-point percentage last year, the Celtics will utilize their 3-point shooting this season with the luxury of having players at every position who can drain shots from behind the arc.

From guys in the front court like Gordon Hayward, Al Horford, Marcus Morris, Jaylen Brown and rookie Jayson Tatum to guards like Kyrie Irving, Marcus Smart and Terry Rozier, consider nearly every player in Stevens' rotation this season an outside threat. With the loss of defensive standouts Avery Bradley and Jae Crowder, Boston will rely on its elite scoring to win games and outside shooting will serve as a catalyst to most victories while they search for their defensive continuity throughout the regular season.

Last spring, the three teams with the best 3-point shooting percentage during the regular season were three out of the four teams still standing in the third round of the playoffs. While the Celtics finished 13th in the same statistical category, they were ranked third behind the Rockets and Cavaliers in 3-pointers made per game (12.1).

However, it wasn't so much the numbers that stood out throughout the four exhibition games but rather the number of open looks Celtics players received. Stevens' flex-offense creates plenty of space for perimeter shooting but adding a player with arguably the best ball handling skills in the game commands a lot of attention from opposing teams.

Couple that with the Irving-Al Horford's pick-your-poison pick-and-roll threat, the Celtics will be a tough team to beat when the 3-ball is falling. If last Wednesday's 16 made 3-pointers is an early indication of what we can somewhat expect as the norm out of the 2017-18 Celtics, Boston will undoubtedly finish the season with one of the best records in the league.