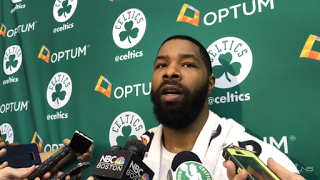 Marcus Morris is inching closer to making his Celtics debut.

The veteran forward says he's just about ready to ready to start the season. After Monday's practice, Morris told reporters that he's in great shape and is aiming at Oct. 30 as his return date at TD Garden against the Spurs.


"I'm in great condition," Morris said. "I just want to be a little better. My conditioning has never been the problem. It's the soreness in my knee. It's gotten a lot better over the past 10 days, so I feel I can play now. But be cautious because it's a long season."

Morris, who spent some time facing Jayson Tatum in a one-on-one, says it "felt pretty good beating the rook's ass one-on-one," a telling sign that he will be ready to return to full-contact practice very soon. He's expected to be a vital piece for the Celtics this season, especially on the defensive end.

He joined the Celtics after the start of preseason after he was acquitted of assault charges in Phoenix. Morris was already dealing with soreness in left knee when he arrived to Boston.


"I came into preseason so it's just a little aggravation," Morris said. "I got an MRI, everything was clean, no structural damage, so I think it was just the fact that I missed camp. My honest opinion that I didn't put as much on it as everyone else did and try to jump into it and I think it just aggravated it a little bit. But these past couple days it's been feeling really good. I tested it out one-on-one today and continue to gradually go about it."

The Celtics traded for Morris during the offseason to create cap space to sign Gordon Hayward. Swapping Avery Bradley, the longest-tenured Celtic at the time, gave Boston a two-way player in the front court who's on a cheaper deal and is inked through 2019.

Morris appeared in one preseason game -- where he scored seven points -- and hasn't seen the floor since.