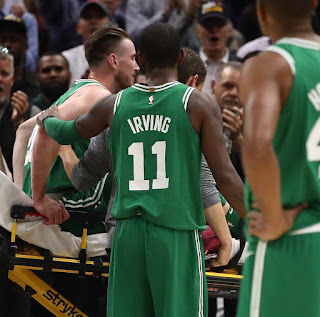 Just five minutes into his Celtics debut and Gordon Hayward was taken out on a stretcher after falling on his left ankle, while attempting to catch an alley-oop pass from teammate Kyrie Irving.

The Celtics confirmed the injury to be a dislocated left ankle, plus a fractured tibia and the All-Star forward was flown immediately back to Boston for further examination

“It’s a dislocated ankle and a fractured tibia down there, whatever the bone is on the leg,” Celtics coach Brad Stevens said after the 102-99 loss to Cleveland, which was worst than the fractured ankle that the Celtics originally diagnosed as Hayward's injury. “Our doctors have looked at it and will know more. But he’s going straight to the hospital when he gets [to Boston].”

While the sports world grimaced in unison when they watched the play that lead to the injury live during the TNT broadcast on Tuesday night, many professional athletes, especially NBA players, took to social media to voice their concern and support for Hayward.

One particular message from future Hall-of-Famer Kobe Bryant on Wednesday afternoon, has many echoing his words of encouragement, along with well wishes on hopefully a speedy recovery for Hayward.


Be sad. Be mad. Be frustrated. Scream. Cry. Sulk. When you wake up you will think it was just a nightmare only to realize it’s all too real. You will be angry and wish for the day back, the game back THAT play back. But reality gives nothing back and nor should you. Time to move on and focus on doing everything in your power to prepare for surgery, ask all the questions to be sure you understand fully the procedure so that you may visualize it in your subconscious while being operated on and better the chance of it’s success. Then focus on the recovery process day by day by day. It’s a long journey but if you focus on the mini milestones along the way you will find beauty in the struggle of doing simple things that prior to this injury were taken for granted. This will also mean that when you return you will have a new perspective. You will be so appreciative of being able to stand, walk, run that you will train harder than you ever have. You see the belief within you grow with each mini milestone and you will come back a better player for it. Best of luck to you on this journey my brother #mambamentality always.
A post shared by Kobe Bryant (@kobebryant) on Oct 18, 2017 at 8:38am PDT


Bryant, who knows a thing or two about leg injuries, raptured his Achilles tendon four years ago. While the journey to recovery was long and difficult, the 'Black Mamba' knows all too well the roller coaster of emotion that Hayward must be enduring over the last 15 hours or so since the injury occured.

According to ESPN's preliminary reports, Hayward, 27, will undergo surgery on Wednesday at New England  Baptist Hospital.

Here are some other messages of support for Hayward from around the NBA, via Twitter:


Gordon and Robyn, our thoughts are with you and your family. All of Jazz Nation sending best wishes for a speedy recovery. pic.twitter.com/UzYyWX5iaV
— Utah Jazz (@utahjazz) October 18, 2017

Today it‘s not about Basketball, it‘s about a friend and a teammate! Come back stronger, Gordon!🙏🏼☘️ @gordonhayward #Celtics pic.twitter.com/9X3baPKYdk
— Daniel Theis (@dtheis10) October 18, 2017

Woke up this morning praying hard for my guy @gordonhayward ... Minor setback for a MAJOR comeback my brotha, all love from me! 🙏🏾🙏🏾🙏🏾
— Isaiah Thomas (@Isaiah_Thomas) October 18, 2017