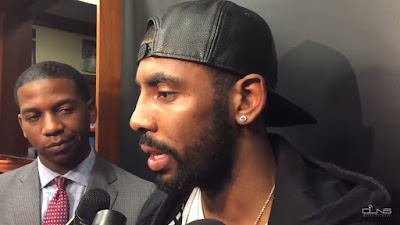 In a league where losing one of your top players can make or break the spirit of a team, the Celtics are learning that lesson the hard way.

As if the task of incorporating 11 new players into a Brad Stevens system that they're not accustomed to wasn't enough, the loss of Gordon Hayward has devastated the Celtics in more ways than one. Hayward was an integral part of that system and while his teammates attempt to move on from his gruesome injury and search for ways to win games without him, Kyrie Irving didn't hold back when talking about the morale of his team after Wednesday night's 108-100 loss to the Bucks.


"You can throw as many emotions in there as you want, man," Irving said. "We know how much G (Gordon Hayward) meant to this team and means to this team. Without him on the floor creating those opportunities we were going over in practice, and we saw in preseason and in the first game, that's a big void to fill. When you think of it in that aspect, of course you want to be frustrated and disappointed. I'm pretty sure that's not what G wants. So, for us, you just have to continue to exude confidence in the young guys and be ready to step up to the plate. It's going to be even higher expectations on our guys in this locker room now to try and fill that hole that G (Hayward) left for us. As one of the leaders on this team, it's my job to pick us up, as well as with Brad and the team with all the guys. We have to look each other in the eyes and know what to expect every single night."

For a team that was only 24 hours removed from seeing one of its own suffer from what appears to be a season-ending injury for Hayward, the Celtics put up a gutsy fight against Giannis Antetokounmpo and the Bucks. However, Irving isn't going to pretend there isn't a humongous void on the court, as well as in the locker room.


"It's not an ideal situation," Irving stated. "So as cliche as it is, everybody is probably going to say that's life. But it is, man. [Expletive] happens. Excuse my language, but it does, man. The individual that we have in Gordon, he's very special. He's going to fight like hell to get back on the floor. I know he's already... there's a fire burning inside of him. You see the amount of support he got. That should tell you the type of person he is. Not only the Boston Celtics but to the rest of the league. We want him to get back healthy but we all understand that his health comes first. He's going to do everything possible to get back on the floor and it's our job to lift him up."

Irving turned in an underwhelming performance Wednesday night. He shot 28 percent from the floor on 7-of-25 attempts, and finished with 17 points.

The four-time All-Star did his best in trying to set up his teammates throughout the first half but finished with only 3 assists. After halftime, Irving was aggressive offensively but never found his rhythm, scoring 7 of his 17 points in the second half while the Bucks created enough separation in the final minute to close out the Celtics.

The C's will seek their first win of the season in Philadelphia on Friday when they take on Ben Simmons and the 76ers.