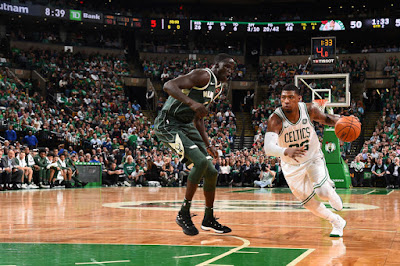 It looks like the Celtics will be adding another player to their inactive list before facing the 76ers Friday night.

Marcus Smart watched his teammates from the sideline during morning shoot around at Philadelphia. That's where he'll "most likely" watch Friday's contest between the Celtics and 76ers after spraining both of his ankles Wednesday night against the Bucks.

Smart says he collided with teammate Jaylen Brown and has been dealing with the injury ever since.


"My ankle got caught right under him. Kind of a freak accident. I wasn't really prepared for it," Smart said. "The right ankle. And the left, actually. Both of them. I rolled both of them. So we're just kind of taking it easy right now. Like I said, it's the third game of the season so we're just trying to make sure that when I do come back, if I do not play tonight, my health will be 100 percent."

Smart joins the Celtics' injury list that is quickly growing since the start of the season. Marcus Morris (knee), who is still nursing his sore knee from preseason remains inactive, Gordon Hayward will most likely sit atop of the IR for the remaining 80 games of the regular season and now this blow to the back court further complicates Brad Stevens' rotation in the first week of the year.

However, Stevens is confident that sitting Smart for Friday's game is strictly precautionary and expects Smart to be ready to go by next Tuesday's matchup against the Knicks at TD Garden.


"It's nothing serious," Stevens said. "That's the good thing."