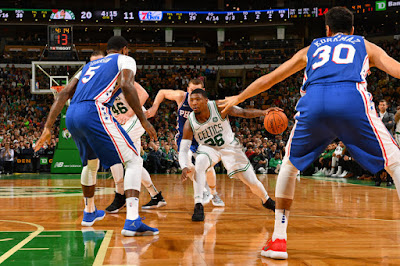 Marcus Smart is entering year four of his rookie deal and while he is currently the longest tenured Celtic, the veteran guard will like to remain in Boston, long-term.

According to The Vertical's Shams Charania, Smart informed him on Monday that his agent, Happy Walters, has yet to hear from the Celtics front office on a possible contract extension.


Marcus Smart has strong desire to remain in Boston, but tells The Vertical he and agent Happy Walters have yet to hear from Celtics front office on possible extension.
— Shams Charania (@ShamsCharania) October 9, 2017

Those from the NBA draft class of 2014 have until midnight on Oct. 16 to agree on extensions from their respective teams.

The Celtics will rely on Smart this season on both ends of the floor, especially after the trade of Avery Bradley, and the additions of All-Stars Kyrie Irving and Gordon Hayward.

If Danny Ainge does not give Smart an extension before this month's deadline, the Celtics could go into next offseason battling other teams to match possible offer sheets for the restricted free agent that might not be ideal considering the team's high payroll.

Either way, Smart losing weight and displaying a much improved jump shot, will help his case when it comes time for the Celtics to decide if he's worth paying to be part of the future here in Boston.


Watch Smart confirm no contract extension has been offered by the Celtics after Monday's win over the Sixers below: