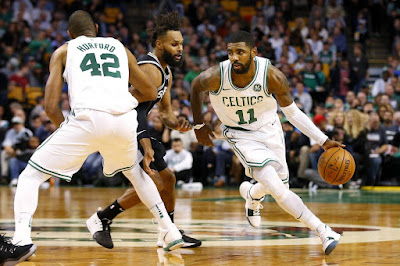 Although it took 12 tries, the Celtics finally defeated the Spurs for the first time since 2011.

Kyrie Irving shined throughout the night on both ends of the floor, leading the Celtics to a second-half rout before the Spurs pulled closer before the final buzzer for a respectable 14-point loss, 108-94.

Irving only needed three quarters to reach 24 points, he poured in eight in the opening three minutes of the second half and things got ugly from there. Boston turned a five-point halftime lead (54-49) into a 19-point drought.

The Celtics' stifling defense certainly picked up in the second half from the starting unit, which then trickled down to the bench guys -- carving out Boston's fifth consecutive victory.


"We went into the season with a few tweaks, but you know, also we really thought that our length could be a factor all over the court," Stevens said about his team's defense. "I still think we can improve quite a bit in that area, but our effort and our attention to detail -- our communication with Al (Horford) and Aron (Baynes) is excellent. You know, if you go through something and walk through one time with Al and Aron, they can direct the whole thing. So that's pretty unique, I think."

Despite the fact the Celtics took advantage of a Spurs team that entered TD Garden on the second night of a back-to-back, Boston's supporting cast contributed to the second-half annihilation while Irving led the way. San Antonio offense turned cold towards the end of the third quarter and before they could put together a vital run to inch close, the Celtics squeezed out a 19-point lead.


"We actually played better even though we got our ass kicked," Spurs head coach Gregg Popovich said. "I saw some things that I liked but we got a lot of stuff to go over with a lot of new guys. It's coming slowly, but I think it's going in the right direction. I thought the Celtics movement was great, I thought they executed really well offensively and they are playing with some edge and some physicality and I think they look wonderful."

Celtics will look to make it six straight on Wednesday night when they host the Kings at TD Garden.

The Celtics finished with a plus-14 advantage over the Spurs in the rebounding department (54-40) and once again reached double-digits in steals. Horford (13 rebounds) and rookie Jayson Tatum (11 rebounds) led the Celtics in cleaning the glass while Irving's three steals led on defense.