Celtics Pregame: Brad Stevens explains why Jayson Tatum will debut in the his starting lineup 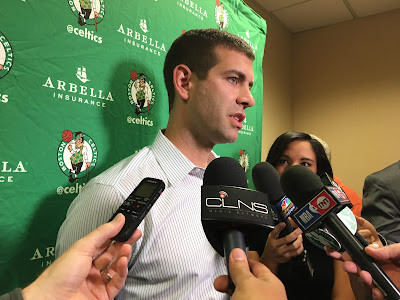 The Celtics' No. 3 overall pick Jayson Tatum is set to make his NBA debut as a member of the starting unit.

Celtics coach Brad Stevens confirmed that Tatum will in fact start in the front court for Boston alongside Al Horford and Gordon Hayward. A spot in the starting lineup may not be the norm throughout the 2017-18 season but for Game 1 of 82, it's all relative according to Stevens.


"Starting, playing, all the minutes are the same to me," Stevens explained at Celtics shootaround. "I know it's a big talking point whether a guy starts or not but it's more important how they play when they get in. I think he compliments that first group well and he plays the game with the right pace and he makes the right basketball play. Age doesn't really matter when that comes into effect. I think also at times when you aren't as experienced and you haven't seen it all, it's better to be on the court when Al, Gordon or Kyrie is on the court."

Rounding out the starting five in the back court will be Kyrie Irving and Jaylen Brown.