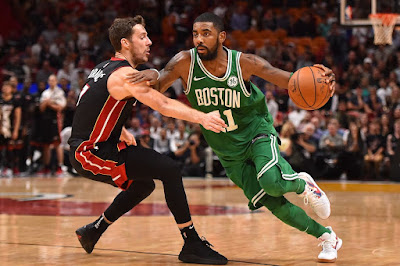 This was the kind of performance Celtics fans have been waiting for.

With two weeks of the regular season already in the books, many questioned Kyrie Irving for being too passive, less aggressive and wondered if the pressure of increased expectations to carry a team on his back without the support of All-Star teammate Gordon Hayward was weighing down on him.

After coming up big alongside Al Horford in the fourth quarter of the Celtics' 96-89 victory over the Bucks, Irving delivered a classic 'give me the ball and I'll lead our team to a victory' kind of performance in Miami.

He poured in nine of the Celtics' last 10 points as Boston held off the Heat, 96-90. Irving finished with 24 points and prevented Miami from completing a comeback down the stretch.

Miami nearly erased an 11-point deficit, pulling within two points (86-84) after Goran Dragic (22 points) drained a turnaround jumper with 1:53 left in the fourth quarter. Irving then outscored the Heat 9-4, he attacked the rim, got to the free-throw line and iced Miami by sinking a dagger 3-pointer with 57 seconds left.

Jayson Tatum also turned in an impressive performance, scoring 20 points and pulling down 5 rebounds. Marcus Smart reverted to his 6th man role -- he led the bench with 16 points and Horford added 12 points and 9 rebounds.

The Celtics held a lead throughout most of the last three quarters after Smart followed up on a steal/transition layup with back-to-back 3's to give his team a 33-30 advantage early on in the second quarter. Miami hung around in the first half before the Celtics created separation in the third quarter, where Tatum scored nine of his 20 points -- which gave Boston their biggest lead of the night (74-63) at the end of the third.

With help from old friend Kelly Olynyk (14 points, 9 rebounds), Dragic led the Heat's fourth-quarter run before Irving topped off his best performance of the young season in the winding minutes of the final frame.

The C's once again controlled the tempo of the game behind an efficient offense that limited themselves to only 12 turnovers and a stellar defense that forced 18 Heat turnovers. Aron Baynes swatted four of the Celtics' 11 blocks and Irving was responsible for three of the Celtics' 11 steals. After five games, the Celtics are currently eighth (16.7) in opponent turnovers per game.