Al Horford ready to take leadership role for the Celtics 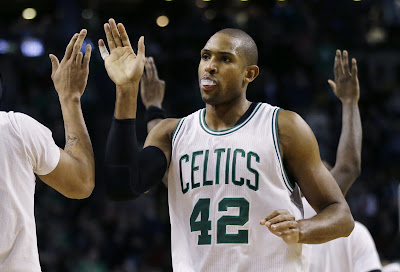 If you haven't heard yet, the Celtics only have four players returning from the 2016-17 roster that won 53 games and made it to the Eastern Conferance Finals.

Al Horford is the only remaining starter from a season ago and at 31, he is the elder-statesman on a Celtics team where the average age is 24 years old.

Horford rounded up more than half the roster and invited them to dinner on the final night of their training camp trip in Newport, Rhode Island. After a meal of mostly seafood, the veteran wanted a picture to capture the moment and posted the photo onto his Instagram account to share with the world, despite not being a huge social media guy.


Unfortunately, whoever was elected to snap the photo failed to take the shot away from the bright street light lamps outside of Sayers Wharf's Mooring Seafood Kitchen & Bar on Thames Street. While Horford's teammates enjoyed the night, they also had fun at the big man's expense when it came to the now famous photo, especially second year swingman Jaylen Brown.


"I think Al still has a flip phone, man," Brown joked the next day. "Al still lives in the Stone Age a little bit. We ought to get him a little bit more hip to what's going on." [ESPN]

Horford, who for the record is a proud owner of the latest iPhone 8, laughed off the phone jokes, but was glad he could make his new teammates feel comfortable as they continue to build chemistry throughout training camp.


"To me, for all the guys to feel good and to feel acclimated, that's important," Horford said. "The quicker that we're able to do that as a group, the better. I feel like we do have a lot of changes -- not just players, but trainers, strength coach, everything. All the change, everything is new for all of us. I want to make it easier on everyone." [ESPN]

For someone who needed a good part of last season to get use to his new surroundings, Horford wants to make sure his 11 new teammates can rely on him if they ever need anything.


"Al is one of those guys that does the right thing all the time. He's very consistent in that," Brown said. "Any time he says something to me, I'm all ears." [ESPN]

Coach Brad Stevens agrees on that type of impact Horford has had on the Celtics locker room since the day he arrived over a year ago.


"I've always really respected Al for every which reason, but the No. 1 thing is, whenever he talks, it's worth listening to," said Stevens. "He really has a way about him that he picks his words carefully, he picks his times to speak carefully. I haven't seen a change in personality -- he hasn't turned all of a sudden into this person who is talking 24 hours a day -- but clearly, when he speaks, everybody listens." [ESPN]

Stevens and his coaching staff have watched Horford be a quiet leader, while making his teammates better. For nine years in Atlanta, the veteran All-Star made it to the postseason every season with the Hawks and that didn't change when he elected to sign in Boston last July.


"I don't think it's a coincidence that so many of our perimeter guys had the best years of their career last year," Celtics president of basketball operations Danny Ainge said. "I think Al, the way he plays, how unselfish he is, his experience ... he's the kind of guy who has the reputation around the league that guys want to play with him." [ESPN]

After just one season with the Celtics, Horford was a part of the recruitment team that helped convince free agent Gordon Hayward to sign in Boston.


"[Horford] was in a similar situation, where he had spent his whole career in another organization and had a chance to change," Hayward said. "I talked to him about that, about making that leap and making that decision. I talked to him also about being someone in a similar situation, as far as having young kids and what it was going to be like living in Boston, living with some of the challenges a big city presents, and some of the benefits of a big city." [ESPN]

While the Celtics have made many changes this past offseason, including adding two All-Stars in Hayward and Kyrie Irving, there are those in the organization that believe Horford is the most important piece to Boston's success like assistant coach Jay Larranaga.


"I would say, on the court, people probably don't realize what an unbelievable help defender [Horford] is," Larranaga said. "You might see a blocked shot at the end of games, but it's how he is in the right position, always. He's covering for teammates constantly. I think people see how unselfish he is, offensively, but he is equally unselfish defensively, and has an equal impact on his teammates' performance.

"Then, off the court, I think, like a lot of the great players and a lot of the players that have been able to sustain success over a long period of time, I think they don't realize how much time and energy he puts into his craft. How much he prepares. His preparation starts every morning when he gets up with what he's eating, he's constantly learning and trying to get better. I think people have an idea and say, 'Oh, Al's very professional.' Being professional is like a full-time job and his full-time job is not just during the season, it's in the offseason. I think people have an idea but not to the extreme." [ESPN]

Jaylen Brown worked out with Horford and Larranaga this summer and while the Georgia native already has one year under his belt in the NBA, he clearly has a role model as a teammate in Boston.


"How [Horford] carries himself is how I would like to carry myself," said Brown [ESPN]